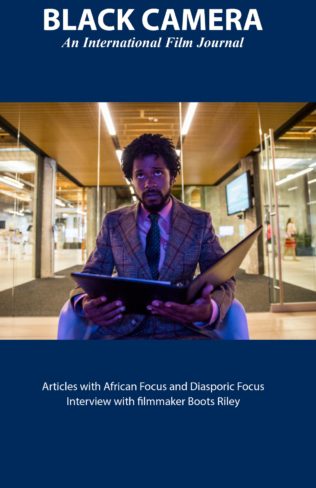 Black Camera, a journal of Black film studies, is devoted to the study and documentation of the Black cinematic experience and aims to engender and sustain a formal academic discussion of Black film production. We include reviews of historical as well as contemporary books and films, researched critiques of recent scholarship on Black film, interviews with accomplished film professionals, and editorials on the development of Black creative culture. Black Camera challenges received and established views and assumptions about the traditions and practices of filmmaking in the African diaspora, where new and longstanding cinematic formations are in play. Issues and special sections are devoted to national cinemas, as well as independent, marginal, or oppositional films and cinematic formations.

The Editor gratefully acknowledges the support for the publication of this journal by The Media School, Indiana University, Bloomington.

Black Camera is devoted to the study of the black cinematic experience and is the only scholarly film journal of its kind in the United States. It features essays and interviews that engage film in social as well as political contexts and in relation to historical and economic forces that bear on the reception, distribution, and production of film in local, regional, national, and transnational settings and environments.

In addition, Black Camera includes research and archival notes, editorials, reports, interviews with emerging and prominent filmmakers, and book and film reviews and addresses a wide range of genres—including documentary, experimental film and video, diasporic cinema, animation, musicals, comedy, etc. While its scope is interdisciplinary and inclusive of all of the African diaspora, the journal devotes issues or sections of issues to national cinemas, as well as independent, marginal, or oppositional films and cinematic formations.

The Editors and Advisory Editorial Board