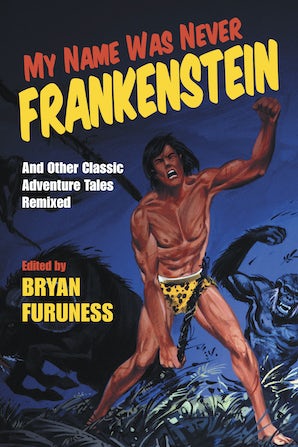 My Name Was Never Frankenstein

And Other Classic Adventure Tales Remixed

This is the NEW book I want to promote!

The film is a parody of the classic horror film genre, in particular the various film adaptations of Mary Shelley’s novel Frankenstein produced by Universal Pictures in the 1930s. Much of the lab equipment used as props was created by Kenneth Strickfaden for the 1931 film Frankenstein. To help evoke the atmosphere of the earlier films, Brooks shot the picture entirely in black and white, a rarity in the 1970s, and employed 1930s’ style opening credits and scene transitions such as iris outs, wipes, and fades to black. The film also features a period score by Brooks’ longtime composer John Morris.

A critical favorite and box office smash, Young Frankenstein ranks No. 28 on Total Film magazine’s readers’ “List of the 50 Greatest Comedy Films of All Time”, No. 56 on Bravo TV’s list of the “100 Funniest Movies”, and No. 13 on the American Film Institute’s list of the 100 funniest American movies. In 2003, it was deemed “culturally, historically or aesthetically significant” by the United States National Film Preservation Board, and selected for preservation in the Library of Congress National Film Registry. It was later adapted by Brooks and Thomas Meehan as a stage musical.

On its 40th anniversary, Brooks considered it by far his finest (although not his funniest) film as a writer-director

© 2019 The Trustees of Indiana University Press