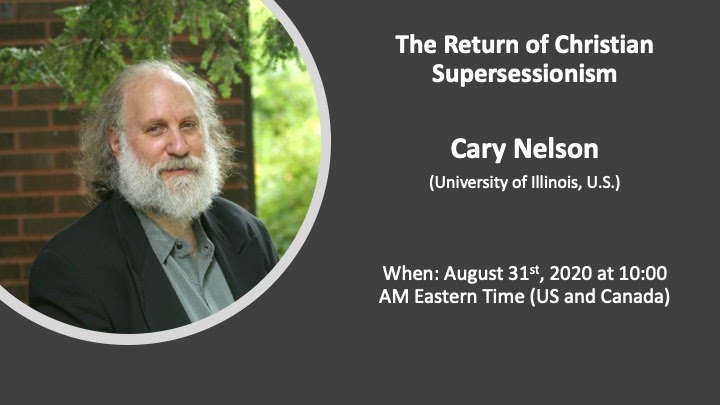 Stay tuned to Indiana University’s Institute for the Study of Contemporary Antisemitism “Come and Learn” Webinar Program for when the event registration opens.

Beginning most prominently with the Catholic Church’s ground-breaking document Nostra Aetate in 1965, and followed by several mainline Protestant denominations, there was for decades a steady effort to reject (or at least qualify) the fundamental Christian belief in supersessionism, the theological position that Christianity superseded or replaced Judaism and its divine covenant. Over the last generation, however, supersessionism has returned in company with the BDS movement. We will review both the theological and political consequences of an ancient prejudice that has been revived to give religious warrant to anti-Zionism. And we will describe the principles that can be invoked to counter its effects.

Cary Nelson, Professor Emeritus of English at the University of Illinois at Urbana-Champaign, is the author or editor of over 30 books, including Dreams Deferred
A Concise Guide to the Israeli-Palestinian Conflict and the Movement to Boycott Israel, Anti-Zionism on Campus The University, Free Speech, and BDS, The Case against Academic Boycotts of Israel, and Israel Denial: Anti-Zionism: Anti-Semitism, & the Faculty Campaign Against the Jewish State. Peace and Faith: Christian Churches and the Israel-Palestinian Conflict is forthcoming.