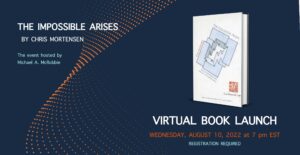 Indiana University Libraries and IU Press are proud to invite you to join us to celebrate the launch of our very special new publication, The Impossible Arises: Oscar Reutersvärd and His Contemporaries by Chris Mortensen. Mortensen will be hosted by Indiana University Chancellor Michael A. McRobbie, and will be joined by several special guests for the event.

The Impossible Arises explores the life and work of Oscar Reutersvärd (1916–2002), founder of the Impossible Figures movement. The movement began in Stockholm in 1934 when eighteen-year-old Reutersvärd drew the first impossible triangle. Over the course of his life, he would go on to draw around 4000 impossible figures and be honored by the Swedish government with an issue of stamps showing his work.

Based on a large collection of Reutersvärd’s art and correspondence held at the Lilly Library at Indiana University Bloomington, this lavishly illustrated book examines the evolution of Reutersvärd’s impossible figures and how they influenced other modern artists in the later twentieth century.

The Impossible Arises offers a detailed look at the philosophy guiding Reutersvärd’s art and presents a rich array of stories from his eccentric personal life. It is an essential introduction to the life and career of one of the most fascinating artists of the twentieth century.

Chris Mortensen is Professor Emeritus in the Department of Philosophy at the University of Adelaide. He is author of Inconsistent Mathematics and Inconsistent Geometry.

Michael A. McRobbie served as the 18th president of Indiana University from July 1, 2007, to June 30, 2021. Prior to stepping down from the IU presidency, he was among the country’s longest-serving presidents of a major public research university.  He was appointed university chancellor on July 1, 2021. McRobbie is only the third person to be appointed to this position in IU’s 200-year history.

Register for the event here.

The Impossible Arises is published by Indiana University Press as part of its Special Publications of the Lilly Library Series and is available in August 2022.