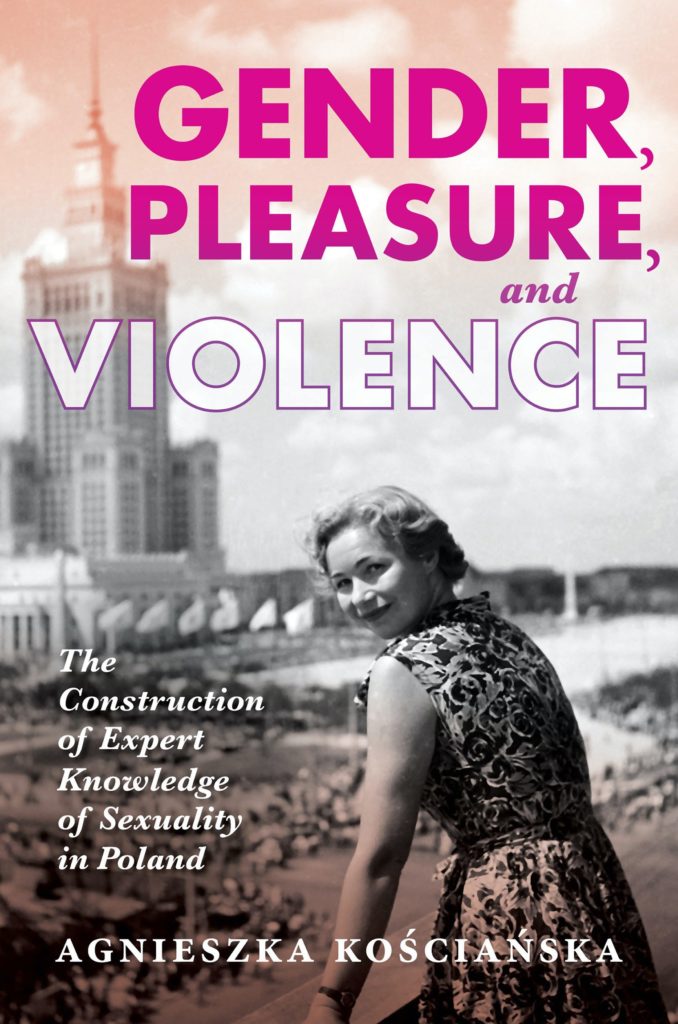 Join the author of Gender, Pleasure, and Violence: The Construction of Expert Knowledge of Sexuality in Poland for a virtual event on Wednesday, March 31, 2021 – 12:00pm to 1:00pm. Sponsored and hosted by the Davis Center for Russian and Eurasian Studies at Harvard University.

Hosted and sponsored by: Kathryn W. and Shelby Cullom Davis Center for Russian and Eurasian Studies at Harvard University

Agnieszka Kościańska is Leverhulme Visiting Professor at the Oxford School of Global and Area Studies and Associate Professor in the Department of Ethnology and Cultural Anthropology, University of Warsaw. In the past, she was a visiting fellow at Harvard University (2010-2011, Marie Curie fellowship), the New School for Social Research (2006, Kosciuszko Foundation grant), the University of Copenhagen (2005, Danish Governmental scholarship), Edinburgh College of Art (2017, European Visiting Research Fellowship by the Caledonian Research Foundation and the Royal Society of Edinburgh) and the Imre Kertész Kolleg Jena (2016, 2017-2018). She is the author and (co)editor of several volumes on gender and sexuality, including To See a Moose: The History of Polish Sex Education (forthcoming with Berghahn Books 2021, Polish version 2017, Wydawnictwo Czarne), Gender, Pleasure, and Violence: The Construction of Expert Knowledge of Sexuality in Poland (Indiana University Press 2021, Polish version 2014, University of Warsaw Press).

This is the first account of sexual liberation in Eastern Europe during the Cold War. Kateřina Lišková reveals how, in the case of Czechoslovakia, important aspects of sexuality were already liberated during the 1950s – abortion was legalized, homosexuality decriminalized, the female orgasm came into experts’ focus – and all that was underscored by an emphasis on gender equality. However, with the coming of Normalization, gender discourses reversed and women were to aspire to be caring mothers and docile wives. Good sex was to cement a lasting marriage and family. In contrast to the usual Western accounts highlighting the importance of social movements to sexual and gender freedom, here we discover, through the analysis of rich archival sources covering forty years of state socialism in Czechoslovakia, how experts, including sexologists, demographers, and psychologists, advised the state on population development, marriage and the family to shape the most intimate aspects of people’s lives.

Kateřina Lišková is an Associate Professor in sociology at Masaryk University, Czech Republic. Her research focuses on gender, expertise, sexuality, and the social organization of intimacy, particularly in Central and Eastern Europe. She is currently affiliated as a guest researcher with the Department of History and Art History of Utrecht University. In the spring of 2021, she is a Senior Fellow at the Descartes Center for the History and Philosophy of the Sciences and the Humanities. She serves as an Editorial Board member for the European Journal for the History of Medicine and Health. As a Marie Curie fellow, she was affiliated with Columbia University and Technische Universität in Berlin. Previously, she was at the New School for Social Research as a Fulbright Scholar, as a Visiting Scholar with New York University, and as a Fellow with the Imre Kertész Kolleg in Jena, Germany. Her research on gender, sexuality, and expertise under state socialism was published by Cambridge University Press in a monograph titled Sexual Liberation, Socialist Style: Communist Czechoslovakia and the Science of Desire, 1945–89, which won the 2019 Barbara Heldt Prize for Best Book and received an honorable mention for the 2019 Adele E. Clarke Book Award. Her papers have appeared in Medical History, History of the Human Sciences, History of Psychology, Sexualities, and History of the Family, among others.

Moderator: Prof. Kristen Ghodsee, Professor of Russian and East European Studies, University of Pennsylvania is a professor of Russian and East European Studies and a member in the Graduate Group in Anthropology at the University of Pennsylvania. She is the author of ten books including Red Hangover: Legacies of 20th Century Communism, (Duke University Press, 2017) and Second World, Second Sex (Duke University Press, 2019). She has held visiting fellowships at the Radcliffe Institute for Advanced Study at Harvard University, the Institute for Advanced Study in Princeton, the Woodrow Wilson International Center for Scholars in Washington DC, the Aleksanteri Institute at the University of Helsinki in Finland, and at the Freiburg Institute for Advanced Studies in Germany. Her essays and articles have appeared in publications such as Dissent, Foreign Affairs, Jacobin Magazine, Ms. Magazine, The New Republic, The Lancet, The Baffler, The Washington Post, and the New York Times. In 2012, she won a John Simon Guggenheim Fellowship for her work in Anthropology and Cultural Studies.

Sponsored by the Davis Center for Russian and Eurasian Studies.

The Davis Center for Russian and Eurasian Studies at Harvard University encourages persons with disabilities to participate in its programs and activities. If you anticipate needing any type of accommodation or have questions about the physical access provided, please contact us at 617-495-4037 or [email protected] in advance of your participation or visit.

Requests for Sign Language interpreters and/or CART providers should be made at least two weeks in advance if possible. Please note that the Davis Center will make every effort to secure services but that services are subject to availability.