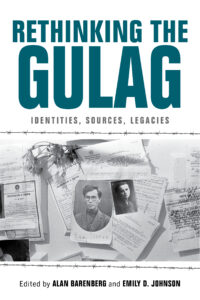 The Soviet Gulag was one of the largest, most complex, and deadliest systems of incarceration in the 20th century. What lessons can we learn from its network of labor camps and prisons and exile settlements, which stretched across vast geographic expanses, included varied institutions, and brought together inmates from all the Soviet Union’s ethnicities, professions, and social classes?

Drawing on a massive body of documentary evidence, Rethinking the Gulag: Identities, Sources, Legacies explores the Soviet penal system from various disciplinary perspectives. Divided into three sections, the collection first considers “identities”—the lived experiences of contingents of detainees who have rarely figured in Gulag histories to date, such as common criminals and clerics. The second section surveys “sources” to explore the ways new research methods can revolutionize our understanding of the system. The third section studies “legacies” to reveal the aftermath of the Gulag, including the folk beliefs and traditions it has inspired and the museums built to memorialize it. While all the chapters respond to one another, each section also concludes with a reaction by a leading researcher: geographer Judith Pallot, historian Lynne Viola, and cultural historian and literary scholar Alexander Etkind.

Moving away from grand metaphorical or theoretical models, Rethinking the Gulag instead unearths the complexities and nuances of experience that represent a primary focus in the new wave of Gulag studies. Alan Barenberg is the Buena Vista Foundation Associate Professor of History at Texas Tech University. He is the author of Gulag Town, Company Town: Forced Labor and Its Legacy in Vorkuta (Yale University Press, 2014). Emily D. Johnson is the Brian and Sandra O’Brien Presidential Professor of Russian at the University of Oklahoma. She is the author of How St. Petersburg Learned to Study Its Self: The Russian Idea of Kraevedenie (Penn State University Press, 2006) and, along with Julie Bucker, coeditor of the volume Rites of Place: Public Commemoration in Russia and Eastern Europe (Northwestern University Press, 2013). She also served as the editor and translator for Arsenii Formakov, Gulag Letters (Yale University Press, 2017). Dan Healey is Professor of Modern Russian History at St. Antony’s College, Oxford. His research and publications have concentrated on the social and cultural history of modern Russia and the Soviet Union, with particular interest in the history of sexualities and gender in modernizing Russia, and the role of medicine and law in shaping the regulation of sexual and gender dissent and conformity. His books include Russian Homophobia from Stalin to Sochi (Bloomsbury Academic, 2017), Homosexual Desire in Revolutionary Russia: The Regulation of Sexual and Gender Dissent (Chicago, 2001), and Bolshevik Sexual Forensics: Diagnosing Disorder in the Clinic and Courtroom, 1917-1939 (DeKalb, Il., 2009). Mikhail Nakonechnyi is a post-doctoral researcher at the Aleksanteri Institute, Finnish Centre of Russian and Eastern European Studies, University of Helsinki. Currently he works for the 5-year project GULAGECHOES, funded by the European Research Council (ERC) and devoted to the research of ethnic identities’ construction in the Soviet Gulag and post-Soviet prison systems. He was awarded a PhD by the University of Oxford (UK) in 2020. Gavin Slade is Associate Professor of Sociology at Nazarbayev University, Kazakhstan. His most recently completed project was a comparative study of prison gangs under conditions of reform in Lithuania, Moldova, Georgia and Kyrgyzstan, the results of which were published in the British Journal of Criminology, Theoretical Criminology and the European Journal of Criminology. His current project (www.gulagshadow.org) concerns societal and elite attitudes, perceptions and cultural consumption of prisons in the former Soviet Union, funded by the Economic and Social Research Council of the UK. Sarah J. Young is Associate Professor of Russian at the School of Slavonic and East European Studies, University College London, where she teaches and researches nineteenth- and twentieth-century Russian literature, culture and thought. She is the author of Dostoevsky’s ‘The Idiot’ and the Ethical Foundations of Narrative (Anthem Press, 2004), and translator and editor of Writing Resistance: Revolutionary Memoirs of Shlissel’burg Prison, 1884-1906 (UCL Press, 2021). Her present research focuses on the Russian tradition of carceral writing.