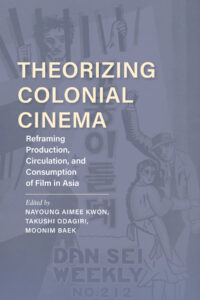 Join the AAS 2022 Annual Conference March 27, 2022 at 10:45 am (EST) for a roundtable session on Theorizing Colonial Cinema: Reframing Production, Circulation, and Consumption of Film in Asia!

This roundtable session brings together international contributors of a recently published volume, Theorizing Colonial Cinema (Indiana University Press, 2022), into dialogue about research methods on cross-border scholarly collaborations. Volume editors and contributors will frame individual chapter research on archival and collaborative research methods of working together and apart across various borders, languages, and disciplines.

This roundtable aims to generate further conversation among scholars from various fields—Asian studies, film and media studies, postcolonial, and cultural studies as a way of envisioning new ways of doing engaged and collaborative research across historic divides and contemporary inequalities in access and resources. The discussion uses the case study of a collaborative volume that proposes a timely retrospective on the century-long constitutive relationship of film and colonialism from the past to contemporary legacies in and of Asia to discuss ongoing challenges in academic research on transnational film cultures.

The roundtable discussants open with the question, “How might prior articulations about film form, theory, history, and ideology be rearticulated when we put the colonial question at the center rather than the periphery of our concerns?” As a way of examining film’s broader connections to colonialism, the session reframes inherited perspectives by beginning our inquiries in the colonies and then looking outward. Our premise is that while prior scholarship in global film studies has made important headway in examining various aspects of colonial cinemas, scholars up to now have focused primarily on the points of view of Europe’s past imperial histories and archives about the colonies over there. Furthermore, local and regional blind spots and censorship within Asia of contentious colonial memories impeded postcolonial understanding.

The panelists discuss newly opened archives in Asia and better channels for inter-Asian and transpacific collaborations in and beyond the region since the beginning of the millennium that have given us a timely opportunity to pay renewed attention to historically inaccessible perspectives from the colonies themselves and to present-day repercussions and reverberations. The roundtable panelists introduce their own contributions and later developments, which will stimulate free discussion with one another and the audience.