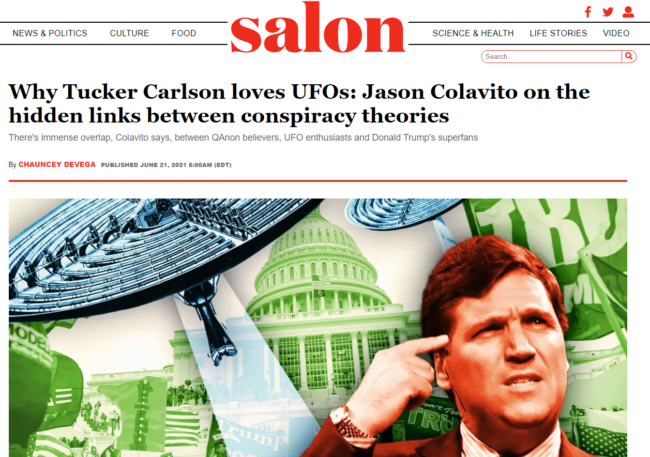 Why Tucker Carlson loves UFOs: Jason Colavito on the hidden links between conspiracy theories | Salon | Featuring The Legends of the Pyramids: Myths and Misconceptions about Ancient Egypt by Jason Colavito | June 21, 2021

In this conversation, Colavito places these “new” conspiracy theories about QAnon and the Big Lie about the 2020 election — as well as the decades-long popular obsession with UFOs — in a larger context of fear and anxiety about social change in America, arguing that a particular version of insecure white masculinity (and white supremacy more generally) is central to many of today’s most widely believed conspiracy theories.

Colavito also details how right-wing extremists are using UFOs, “ancient aliens” and other supposedly “fun” conspiracy theories to radicalize and recruit new members, and discusses how figures like Rudy Giuliani and Tucker Carlson as well as the “Stop the Steal” plotters figure in that dynamic.

At the end of this conversation, Jason Colavito shares his thoughts about the soon-to-be-released Pentagon report on UFOs — which will almost certainly not report that the Earth is being visited by extraterrestrials.