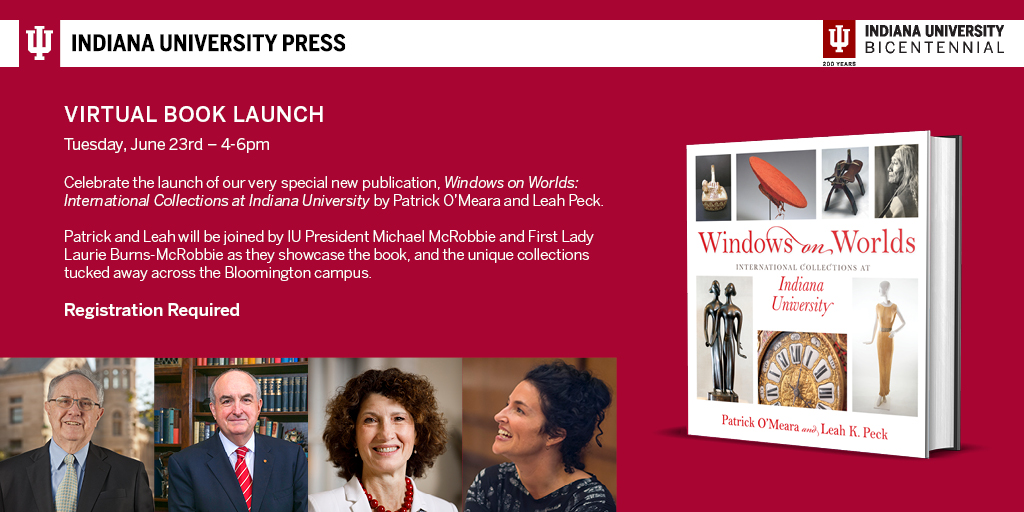 Windows on Worlds: International Collections at Indiana University is the second book from IU Vice President Emeritus for International Affairs Patrick O’Meara, special adviser to the president, and Leah K. Peck, who worked with O’Meara while earning her Ph.D. Like their first, the book highlights IU’s longstanding international ties. It’s one of several Well House Books that showcase the university, in partnership with the IU Bicentennial.

Windows on Worlds shows that one doesn’t have to travel far on IU’s Bloomington campus to experience other parts of the world. A collection of wooden, secret-opening puzzles that resemble a bowl of miso soup and a paper fan take you from the Lilly Library to Japan. An ornate silk-and-wool Persian rug in the living room of Bryan House once belonged to the Shah of Iran. And a painting of water buffalo that hangs in the Indiana Memorial Union transports you to the landscape of Mexico’s Sierra Madre Mountains.

“The fact that international emphasis at Indiana University is not something that’s suddenly put into place in the last 10 years, it’s going on for the past century — it says a lot,” O’Meara said. “It says a lot about the vision of the place.”

The book is broken up into chapters that are focused on a central theme, which takes readers on a journey across campus and mediums. While the book includes some of the university’s most well-known holdings, like the Sage Fashion Collection, it highlights many pieces whose significance is not widely known. A version of the French wallpaper that adorns the walls of the Federal Room in the IMU and portrays American landscapes, for example, was also installed in the White House by Jacqueline Kennedy.

“I think the vastness of IU’s collections really demonstrates IU’s commitment to research and learning, and also wanting to spread knowledge about people and ideas, and cultures and art, that might not be immediately accessible to the average person in the Midwest.”

O’Meara said the book underscores international exposure as a key component of an IU education. The art and objects on display across the university teach students about different cultures and places even if they aren’t able to travel far beyond campus.

“It’s really a unique moment for a student who stumbles in, walks through a museum and suddenly encounters something,” O’Meara said. “And that’s a lifechanging moment. And it opens up an amazing world.”

“Windows on Worlds” is being released at a time when many of the world’s cultural institutions are temporarily closed because of the COVID-19 pandemic. It allows people to continue discovering important works while they can’t experience them in person.

“A book like this that brings compassion, and understanding and knowledge are especially needed right now,” IU Press Director Gary Dunham said.

The virtual book launch hosted by the McRobbies at 4 p.m. June 23 will feature a discussion with O’Meara and Peck. Registration is required.