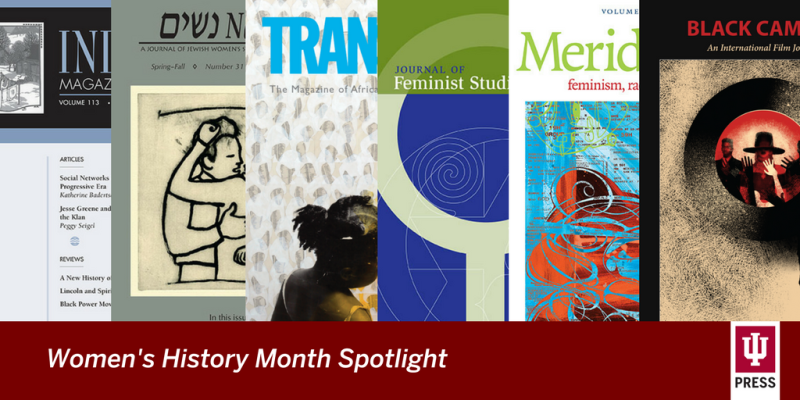 In honor of Women’s History Month, enjoy some of our journals’ most recent contributions to the exploration of women’s issues across wide-ranging subject areas!

Black Camera is a journal of black film studies, edited at the Black Film Center/Archive at Indiana University-Bloomington, and engenders an academic discussion of black film production, including historical and contemporary book and film reviews, interviews with accomplished film professionals, and editorials on the development of black creative culture.

Queen Bey and the New Niggerati: Ethics of Individualism in the Appropriation of Black Radicalism

This essay explores the contributions of Beyoncé to what I call “the New Niggerati,” a cadre of Black cultural producers engineering American popular culture. Their promotion of individual economic improvement is a discursive shift in Black music, a “dap” to advanced capitalism. Beyoncé's hegemonic power to move the culture places her at the apex of the New Niggerati. With the simultaneity of her privilege and a perceived Black southern realism, she represents a new frontier for Black feminist cultural studies. I examine a selection of her work to demonstrate the complicated nature of her manipulations of protest iconography within an apparatus of capital designed to suppress revolutionary consciousness. Beyoncé's fetishized Black feminist radicalism has transformed the politics of social movements into a set of commodities that ultimately sustain her personal empire.

Published continuously since 1905, the Indiana Magazine of History is one of the nation's oldest historical journals. Since 1913, the IMH has been edited and published quarterly at Indiana University, Bloomington.

Finding payroll records containing the names of hundreds of nineteenth century women wage-earners. Opening a fascinating women’s manuscript collection that no one has researched. Reading a book about a woman in another state and wondering if any Indiana woman had the same experience. Running into a student or colleague and bemoaning the fact that women’s historians in Indiana never meet to discuss their findings. All of this, and more, led to the January 14, 2014, meeting at which Marcia Caudell of the Indiana State Library, Nancy Conner of Indiana Humanities, Dani Pfaff of the Indiana Historical Bureau, Jeannie Regan-Dinius of the Indiana Women’s History Association and the Indiana Department of Natural Resources, and Elizabeth Osborne of the Indiana State Supreme Court set in motion the first conference devoted strictly to the history of Indiana women.

Jan Willis is professor emerita of religion at Wesleyan University in Middletown, Connecticut, and visiting professor of religion at Agnes Scott College in Decatur, Georgia. She is author of The Diamond Light: An Introduction to Tibetan Buddhist Meditation (1972), On Knowing Reality: The Tattvartha Chapter of Asanga’s Bodhisattvabhumi (1979), and Enlightened BeingsL Life Stories from the Ganden Oral Tradition (1995); and editor of Feminine Ground: Essays on Women and Tibet (1989).

At the Last Well on Earth: Climate Change Is a Feminist Issue

There will be a time, in most of the world, when the last well goes dry. And this is because so much of the world lives already on the brink of a dreadful thirst, a life only made tolerable because women travel great distances to find the wells or the rivers or the ditches, scoop up the water, and bring it home. They carry it on their backs, or their heads, or on their hips, like a child. In Africa alone, women walk forty billion hours a year to bring this water home.

Meridians provides a forum for the finest scholarship and creative work by and about women of color in U.S. and international contexts and recognizes that feminism, race, transnationalism, and women of color are contested terms and engages in a dialogue across ethnic and national boundaries.

Sex Wars and the Contemporary French Moral Panic: The Productivity and Pitfalls of Feminist Conflicts

Over the past few years, right-wing political groups in France have made sexuality a focus of their concerns. Since the debate about political lesbianism in 1980, feminist research on sexuality in France has been markedly limited to research on abortion, contraception, and sexual violence. In this article, I look back at the US feminist “sex wars” as a crucial turning point in feminist thought on sexuality and examine different aspects feminists address when speaking about sexuality. I argue that the multiplicity of levels of thinking sex brought up by US feminists opposes a structural- and an individual-based perspective. These multiple levels crosscut on the topics of sexual practices, identities, and morals, the very themes of the sex wars. Together they compose the technology of power (Foucault 1976) that has been constructed under the name of sexuality in the nineteenth century. The contributions of the US feminist debate on sexuality help to broaden an understanding of sexuality in today's politics in France. But in taking a closer look at the US feminist sex wars, it appears that they actually coincide with the US construction of French feminism and French theory. The trajectories of Monique Wittig's and Michel Foucault's works provide examples of the productivity of translations. They also stand for different feminist strategies of thinking sex that after a closer examination do not seem so radically opposed any more. Through this analysis the deconstruction of sexuality as an entity is suggested in re-embracing the critical questions set by the authors of the sex wars.

Kidushin—betrothal—the central legal act that creates a binding relationship between a Jewish man and a Jewish woman, is ritually and legally a unilateral act, performed by the male participant, and the inequity of Jewish divorce law (the get process) is a function and mirror of this imbalance. In this article, I will consider and provide a halakhic analysis of the following questions: Can kidushin be reformed to become an egalitarian, or more egalitarian, process? Could we, from within the current halakhic structure, address and change the unilateral nature of kidushin and its undoing—divorce? If that is not possible, could Jewish law provide for, or at least accommodate, alternative means of marriage and divorce that sidestep kidushin? If so, what mechanisms might we find within the traditional legal sources for structuring an egalitarian marital commitment between two persons and for undoing such a commitment? What kind of ceremony would create such a commitment, and how would such marriage be terminated? I will survey a number of proposals, encountered in my research or through personal connections, that I believe offer plausible alternatives to kidushin and get, from both a legal and a ritual point of view.

Transition is a unique forum for the freshest, most compelling ideas from and about the black world. Since its founding in Uganda in 1961, the magazine has kept apace of the rapid transformation of the African Diaspora and has remained a leading forum of intellectual debate. Transition is a publication of the Hutchins Center at Harvard University, edited by Alejandro de la Fuente.

Photographer Abdi Osman examines issues of labour and aging in the lives of African and Caribbean women who arrived in Canada in the 1960s and 1970s.

“Missing mothers loom large. It took writing a poem for the mirror to finally reflect back and I saw Mama clearly.” A reflection by Wanjeri Gakuru.