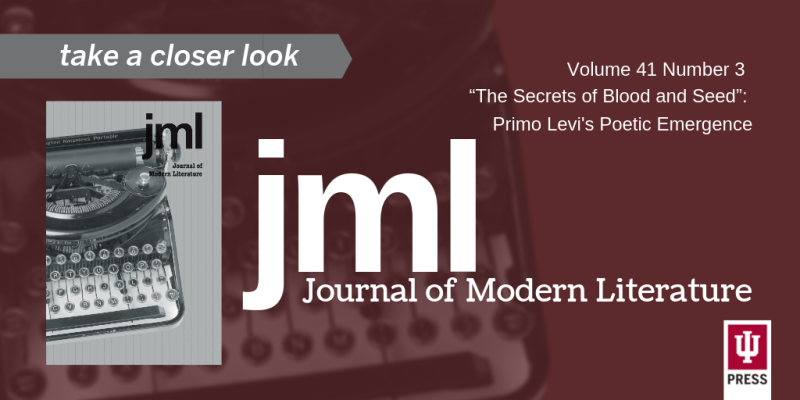 Barbara Estrin’s article, “The Secrets of Blood and Seed”: Primo Levi's Poetic Emergence” from the Journal of Modern Literature’s newest issue, is now available on JSTOR & Project MUSE. Below, Barbara explores a poet who struggles to end the conflict between knowledge and feeling.

I have always demurred from Eli Wiesel’s pronouncement that “Primo Levi died at Auschwitz forty years later” (3). Nowhere did I find a better refutation of Wiesel’s assumption than in Levi’s own Collected Poems. The volume reflects what Levi emphasizes in The Search for Roots: the surprising realization that his “experiences in the concentration camp…weigh[ed] so little” (5) in the formation of his literary self. Most criticism of his poetry focuses on just four poems: “Buna,” “Shemà,” “Sunset at Fossoli,” and “For Adolf Eichmann.” Almost nothing has been written about more than 70 other pieces where he sought to realize himself in the full force of his creative capacity.

Those lesser-known poems place Levi squarely in the modernist context, along with other writers who began (as he did) in the European tradition and then questioned that poetic in their post-war work. These texts reflect a connection that many poets perceived between poetry and war. Especially striking to me was that Levi—a victim of that interface— categorized himself as a practitioner of the patterns that fed into the rhetoric of genocide.

I also wanted to puzzle the curious phrase in Levi’s Black Hole: “I write because I’m a chemist” (98). If that affinity formed the basis for Levi’s youthful work, this liaison would be explicitly challenged in “Memorandum Book” where the atomic bomb is linked to fourteenth-century art. Levi demonstrates that the possessive impulse in science and the poet’s “search…for the word that can contain the typhoon’s force” are both problematic (Collected Poems 72), thus exposing the downside of a reciprocity that had fueled his early poems. He cites an interdependence that Adrienne Rich emphasizes in her later work. In Midnight Salvage (1999), Rich graphically catalogues mid-twentieth century horrors, after which she overturns a younger poet’s faith in the healing of art: “Would it relieve you to decide / Poetry doesn’t make this [the Holocaust and Hiroshima] happen”? (29). In his late poems, Levi similarly “decides” that the poetics he had heretofore pursued had a bearing on the disastrous consequences of twentieth-century violence.

The model for “the sad crepuscular poems” described in The Periodic Table (128) shadows the Ovidian history—“sixty centuries old and always new” (Collected Poems 62)—to which he is indebted. Those poems turn life loss into verbal gain: the search for scientific mastery and artistic closure fuses with an aggression that applies to both love poems and scientific inquiry. As Jean-Paul Sartre writes about that conflation: “It is not enough that a certain picture which I have in mind should exist; it is necessary as well that it exists through me” (736). The denial of the other, the intractability of the material, whether in the Ovidian-Petrarchan complex or in scientific theoretical practice, will sustain the momentum to write and also engage with experiments.

Thus the “no” of resistance understood both as the sought-after other in the poetic tradition and the initial non-compliance of chemical substances in the research lab becomes the “yes” of a poetic and scientific desire to keep going. A productive absence determines lyric imagistic presence and methodically deductive experiment. Levi’s declaration in The Search for Roots that “there are no demons, that the assassins of millions of innocents are people like us. They don’t have different blood to ours” (207) can be understood in view of his two-pronged career.

Refusing to exempt his own work from that indictment, Levi “decides” to follow a different road. His later poems reveal a poet who ends the conflict between knowledge, based on remoteness and the image of a grasping “I,” and feeling produced by a receptive rather than resistant other. His last poems echo Lucretius, a poet-scientist he admires because Lucretius rejoiced in “the body’s sense” of “touch” (Search 138).

As an example of the revisionist Levi, “The Work” centers on a poet who surrenders to, rather than usurps, the other, forgoing the mastery of the appropriative self for the modesty of his pleasure in the inspirational other: “the way a woman leads you to the dance” (Collected Poems 56). Through that new alliance, the poet moves through two states simultaneously; hence he feels doubly energized. In the late poems, Levi finds himself “lively as quicksilver” (ibid.), the chemical compound associated with the shape-changing Greek god Mercury who inspires the word-changing delight of collaboration. These poems reveal how Levi wished to be remembered. 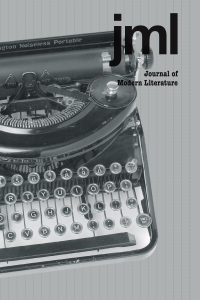 More from the Journal of Modern Literature 41.3

Whose (Meta)modernism?: Metamodernism, Race, and the Politics of Failure
James Brunton

It is I: Robert Creeley's Deictic Subjectivity and the Sublime Self
Andy Weaver

A Myriad of Critical Lenses on The Waste Land
The Cambridge Companion to The Waste Land by Gabrielle McIntire
Review by: Ping Song