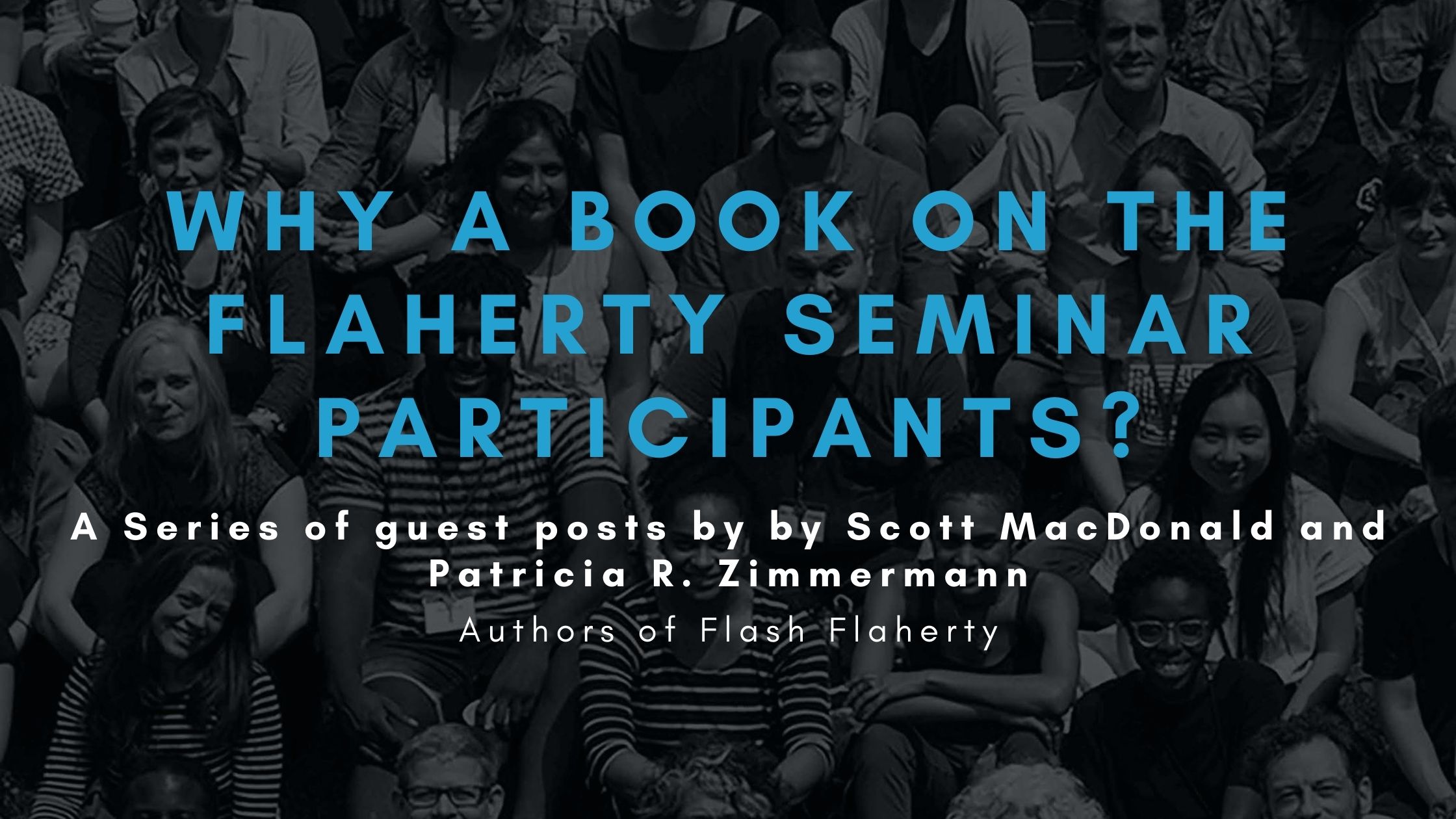 The following is a part of a series of guest posts by Scott MacDonald and Patricia R. Zimmermann, authors of Flash Flaherty: Tales from a Film Seminar.

So why does the Robert Flaherty Film Seminar merit not one but two books, The Flaherty: Decades in the Cause of Independent Cinema (2017) AND Flash Flaherty: Tales from a Film Seminar (2021)?

Compared to major transnational entertainment complexes, the Flaherty Seminar is tiny, a skiff in an ocean of media tankers.

It’s an almost ephemeral and rather underground organization on the exhibition side of the international film and media ecology. It mounts a one-week seminar in the summer on a campus in upstate New York.

In recent years it’s done programming in New York City. It has a newsletter. There are fundraising campaigns.

So why TWO books on this organization?  Are we masochists? Or sadists?

Despite its seemingly marginal status in the worlds of Indiewire and Variety, the 65-year-old Flaherty Seminar has galvanized enormous impact within the international media arts sector.

It’s a think-tank, a retreat, a pit stop, a gathering of the like-minded souls of independent cinema started in 1955 by Frances Flaherty, Robert’s widow. It brings people together who might never interact out there in the real world: students, éminence grises, emerging artists, distributors, programmers, curators, journalists, mid-career makers, librarians, scholars.

Since the 1970s, academic historians have worked to create histories from below, not official histories of nations, institutions, elected officials, but histories of those without power and without voice, such as women, the working class, ethnic minorities, the subaltern.

Our Flaherty books are part of this historical reparation project.

For us, there were no official histories to deconstruct. Only histories from below to recover.

The Flaherty: Decades in the Cause of Independent Cinema was our scholar’s history.

Flash Flaherty gives space to the diversity of people who have attended the seminar over many decades and to their stories.

Rather than interview “subjects,” we asked people to write their own pieces of creative nonfiction, and we worked with them and their stories to intertwine testimony, reflection, bitterness, analysis, gossip, revelations.

We have been inspired, on one hand, by the recent literary interest in “flash fiction” and on the other, by the powerful books of Belarussian journalist Svetlana Alexievich, who has fashioned a monumental history of post–World War Soviet and Russian life by listening to everyday people tell their stories about their experiences. Hers is granular rather than grand history.

Obviously, the experience of the seminar does not compare with the traumas and disruptions Alexievich reveals, but it does resonate with individual voices that produce a polyphonic history of a small organization with massive impact on international film and media culture.

It is just about the only place in the media world where heterogeneity of films across different modes plus different periods plus a multiplicity of attendees equals a combustion of ideas.

The Flaherty operates almost like a media speakeasy. You need to know someone to know about it and to know how to do it.  Only 200 people can attend. It sells out fast.

Flash Flaherty collects 102 stories by 99 veterans of the seminar.

It creates a montage of how the seminar has entered participants’ psyches, practices, thinking, nightmares, souls.