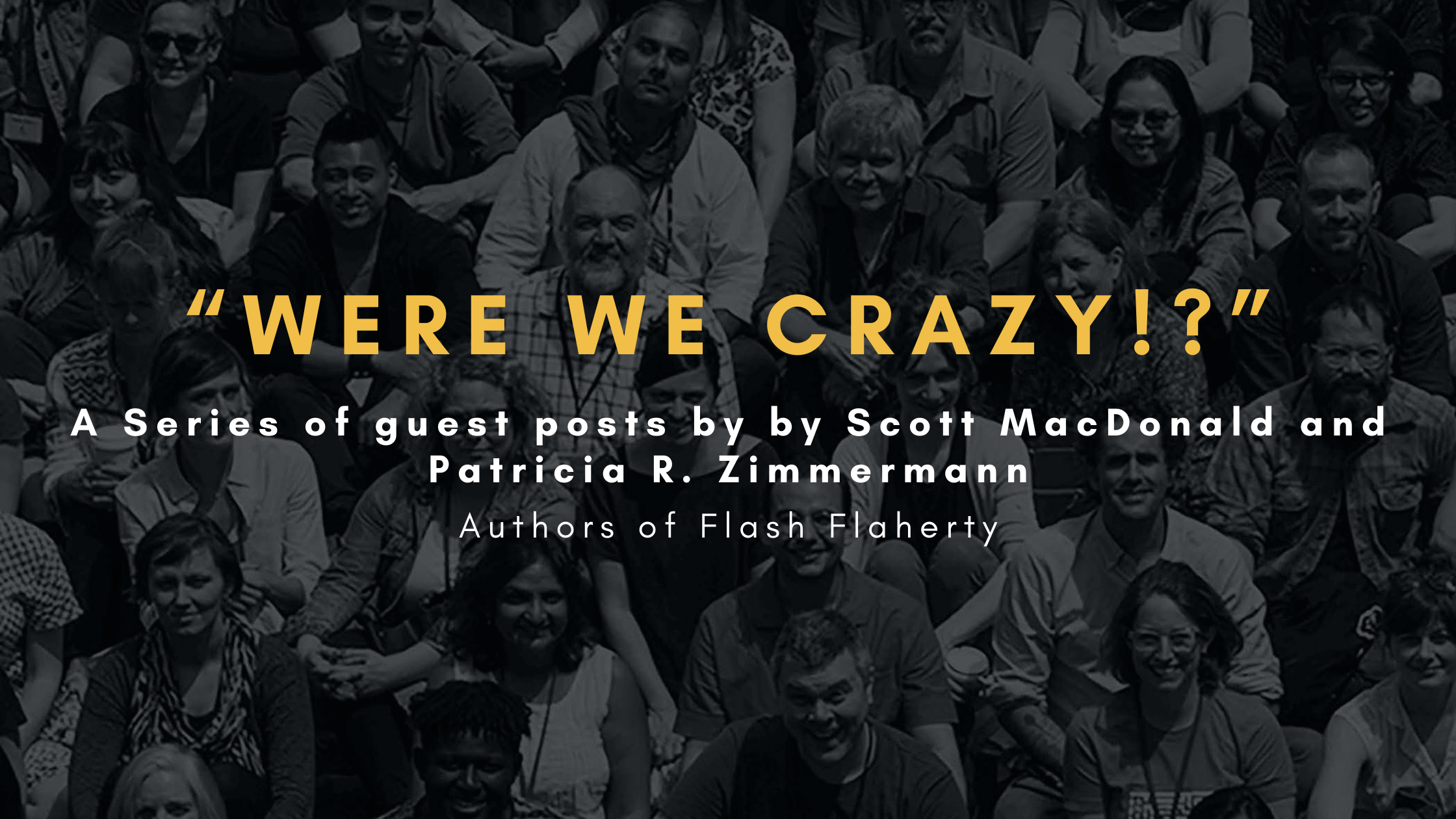 The following part of a series of guest posts by Scott MacDonald and Patricia R. Zimmermann, who are joined in conversation about their book, Flash Flaherty: Tales from a Film Seminar.

Patricia Zimmermann:  Were we crazy to start a second book on the Flaherty Seminar, right after we finished The Flaherty: Decades in the Cause of Independent Cinema? That first book had been a big, long-term project.

Scott MacDonald:  Well, what started it was your blog—all of a sudden people who had been part of the Flaherty Seminar for years began submitting thoughts and stories about the seminar, instigated in part by that first book.

Patricia Zimmermann:  That’s true. At first there were a few postings, and then it grew. It became a Flaherty blog, which we ended up calling “Flaherty Stories,” hosted by Ithaca College.

Scott MacDonald:  So in a way, the seminar—or its veterans anyway—started a new project and we played catch-up! I remember our realizing that a new book seemed to be happening. And that we might just as well accept this good luck and go with it.

Patricia Zimmermann:  Once we’d agreed that the blog was instigating another book, we had to figure out some rules to unify all these different pieces and our own process. The first rule was that the new book would be made up of relatively brief stories—blog-length stories, but written in a more journalistic creative-nonfiction style with shorter paragraphs for readability. We settled on pieces that would be no longer than 1000 words.

Scott MacDonald:  Then the idea of what’s become known as “flash fiction”—collections like Flash Fiction Forward, edited by James Thomas and Robert Shapard, which my son Ian had contributed to—suddenly seemed relevant, though the stories we were collecting weren’t flash fictions!

Patricia Zimmermann:  They were flash nonfictions. We were discovering that the Flaherty stories often had considerable emotional power. They were told with imagination and verve. Many recounted experiences at the seminar that had happened decades earlier but were still vivid for the storytellers.

These stories were a new kind of history—very different from the kinds of history we had assembled in the first book, where I researched the history of the institution itself through archival documents and extensive interviews, and you transcribed and edited what seemed to be crucial post-screening group discussions.

This new project was a kind of people’s history.

Scott MacDonald:  As we got word out about what we were doing, more and more Flaherty veterans let us know they had stories to tell. Steve Montgomery, a filmmaker and nonprofit development consultant with a long history with the Flaherty, helped us find writers. In fact, he served as our de facto agent!

Some of the prospective contributors made clear that they wanted to tell stories but were self-conscious about their writing.

Patricia Zimmermann:  We’d agreed that all stories would be treated equally, most obviously in terms of length and also with regard to inclusion in the book, which would be a montage of different kinds of memories of different moments at the seminar through the decades.

Scott MacDonald:  At first, we wondered if the writers would be okay with our working, as editors, with what they sent us, but actually nearly all of them were very open to collaboration. So the stories tended to go back and forth between us and the writers until all of us were satisfied.

Patricia Zimmermann:  Yes, I’d get the stories first and suggest some avenues for expansion or restructuring or more detail. Then you’d get the next version and would fine-tune each one, working with the individual writers sometimes over weeks or months.

Scott MacDonald:  We struggled for a while about how to arrange the stories. Certain stories were focused on a single Flaherty seminar, but many of the writers had been to multiple seminars. They were writing about their experience over time.

We also realized that readers probably wouldn’t read the book from beginning to end. They’d be more likely to enter at various points, drawn by the names of storytellers they knew or whatever period or topic or picture (each story includes a portrait of the storyteller) piqued their interest.

Patricia Zimmermann:  In the end, we arranged the stories according to the first seminar each writer attended, whether they’re remembering that seminar or remembering backward or forward. We finally fixed on the idea of a chronology that’s not really chronological!