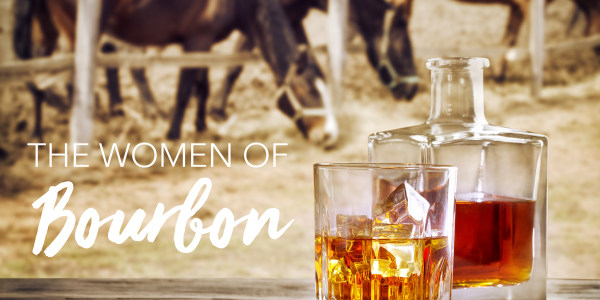 Learn a bit more about the women who helped craft the bourbon we know and love, with thanks to this guest post by Cameron M. Ludwick and Blair Thomas Hess, authors of The State of Bourbon: Exploring the Spirit of Kentucky.

James Brown used to sing, “This is a man’s world / but it would be nothing / nothing without a woman or a girl”—and nowhere is this soulful mantra more true than in the well-aged history of the bourbon industry.

We might trace Kentucky bourbon’s beginnings back to Baptist preacher Elijah Craig, who came to the Bluegrass State in 1782 and settled in what is now Georgetown, KY in 1784. Or maybe bourbon originated with General James Wilkinson a decade earlier, or Joseph and Samuel Davis or James Garrard or William Calk, or a slew of other male characters who’ve been tied in some way to bourbon’s beginnings over the years. But here’s what we now know, more than two centuries later: bourbon would be nothing, nothing without a woman or a girl.

Take the word of these two quick-typing, road-tripping, bourbon-drinking ladies right here: It’s the truth. When the bourbon industry was attempting its post-World War II comeback, they began to age the product longer to improve its taste and broaden their marketing to appeal to women—we’re 51% of the world’s population, thank you very much—changes which helped bring bourbon back to the forefront of the liquor industry.

From the iconic knack for branding of Maker’s Mark’s Marge Samuels, to the original sour mash recipe Catherine Carpenter used to make money and feed her children after the death of her husband(s), to the industry’s first female Master Distiller, here are some of our favorite females who made the bourbon industry what it is today.

Born in 1760 in Rockingham County, Virginia, Catherine Spears was well educated and a trained weaver. In 1776, she married John Frye and migrated with her family and other Shenandoah Valley neighbors to Kentucky. They settled in present-day Casey County, and after her husband died in the Battle of Blue Licks, Catherine married Adam Carpenter. Her second husband died in 1806 and the twice-widowed woman raised nine children on the Kentucky frontier (she birthed 13, but lost four as young children).

She inherited a little more than 667 acres when her second husband died, and by raising cattle and distilling whiskey, she was able to acquire more land. She supported her family by selling the whiskey made from a sour mash recipe she developed.

Catherine died in 1848, and while her whiskey enterprise did not survive her, the sweet mash and sour recipes did. Her recipes can still be found today in the Kentucky Historical Society archives.

Marge Samuels was born into bourbon. Her father’s family co-founded the Mattingly & Moore Distillery in Bardstown in the mid-1800s, and she married Bill Samuels Sr., a sixth-generation Kentucky distiller whose family owned and operated the T.W. Samuels Distillery. The couple also happened to live next door to Colonel Jim and Mary Beam, another famous Kentucky bourbon duo.

In 1953, Marge’s husband was working on a new kind of bourbon that used wheat in place of rye as the secondary grain to corn. She baked bread with a variety of alternative grains, and Bill ultimately selected red winter wheat. When it came time to name the new brand of whiskey they had created, Marge took charge. A noted collector of fine English pewter, she knew the importance of the “maker’s mark” in symbolizing handcrafted quality. She created the bottle and logo’s lettering design printed on a hand-torn label, as well as Maker’s Mark’s famously unique red wax that drips down the neck of the bottle. But Marge didn’t have unanimous support for what seems like a stroke of marketing genius in hindsight. In fact, her husband didn’t think the branding would sell and questioned his wife’s design concept. But Marge Samuels had a trump card: She graduated first in their class at the University of Louisville where the couple met. Bill finished last.

In Marion County, roadtrippers may hear the tale of Mary Jane Blair, who, from 1907 to 1919 operated a distillery in an industry almost entirely dominated by men. (Is anyone else having a “You go girl!” moment right now?) The Blair Distillery, which was known for producing Smith & Smith whiskey that was distributed in the mid-1800s, was situated in the town of Chicago—not the Illinois metropolis—known today as Saint Francis, located about 12 miles west of Lebanon, KY. Mary Jane’s husband, Thomas Blair, became involved in running the distillery in 1879, and in its early days, it is said to have produced about 100-200 barrels a year. After Thomas died in 1907, Mary Jane inherited his shares of the distillery and bought out his partners before renaming the operation after herself (a move that we really, really like.) Her son Nicholas helped her manage the distillery, which grew into a 9,000 barrel-a-year operation producing Blair’s Old Club whiskey and Old Saxon. Mary Jane continued to run the operation until 1919, when Prohibition was passed into law. She died before it was repealed.

Beyond the impact our affinity for drinking bourbon has had on bourbon sales, women continue to make a difference directly in the industry today. Marianne Barnes Eaves, a Brown-Forman prodigy, was named Master Taster for Woodford Reserve when she was just 27. Today she serves as the first female Master Distiller since Prohibition at Castle and Key Distillery, restored from the historic Old Taylor Distillery between Frankfort and Versailles. In an industry that has been dominated by males producing a product marketed primarily to males, Marianne doesn’t fit the mold—she’s a vegan and a self-proclaimed book worm—which is our absolute favorite part about her. Castle and Key released gin in 2016 made with Kentucky-grown botanicals like juniper. It is expected to release its first wheat, rye, and malt whiskies in 2020.

One of the more interesting bourbon tall tales comes from the naming of the Four Roses brand. No one can quite agree how this bourbon got its name, but by one account, the brand was founded by prominent Atlanta society member Rufus Mathewson Rose of Atlanta, a druggist who studied medicine and owned and operated the R. M. Rose & Co. Distillery in Vining, Georgia. The story goes that Rose wanted to create a brand name for the whiskey coming out of the Kentucky distillery he had founded in the 1860s. Today we might not consider branding a big deal—it’s practically required in order to sell a product—but in the late 1800s marketing (at least as we know it) was a novel idea. R.M. Rose’s whiskey was already known as Rose’s Whiskey so the idea of using the image of a rose was practical. But here the story gets a bit romanticized: it is said that as Rose waffled on the final name of his Kentucky bourbon, his four daughters showed up to one of the family’s frequent formal balls, each with roses for their corsages. When the girls appeared at the top of the stars with their flowers, Proud Papa decided he would name his new brand the Four Roses.

It’s fair to point out that other accounts say Rufus only had one daughter and a son, but where’s the fun in that? We still like these brand-inspiring ladies.

Excerpts have been taken from The State of Bourbon: Exploring the Spirit of Kentucky by Cameron Ludwick and Blair Thomas Hess. These excerpts are published with permission from the authors. 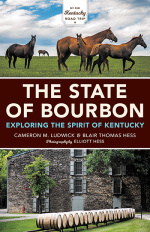 Cameron M. Ludwick is a bookworm, trivia nerd, and former band geek who still relies on the survival skills she learned at Girl Scout camp to cope with nature. A Kentucky native, she now has bigger hair and lives in Austin, Texas. Blair Thomas Hess is a born-and-bred Kentuckian who once won a sack-the-pig contest at the Trigg County Country Ham Festival. She resides in Frankfort, Kentucky, with her daughter and her picture-taking, bourbon-collecting husband.