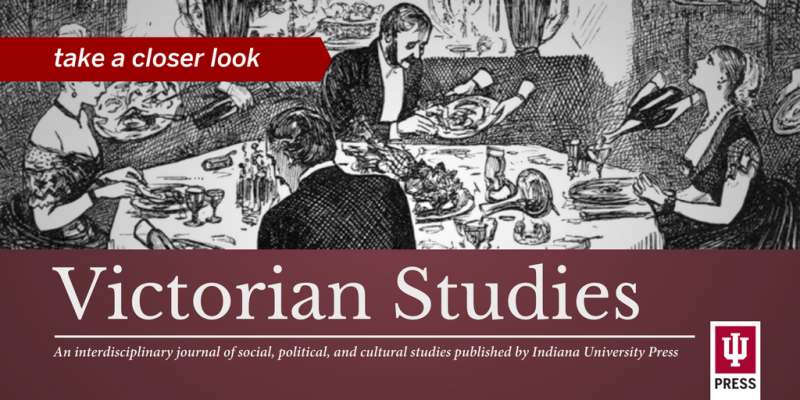 By the early 1850s, tables and chairs in British households were making an array of unpredictable movements and noises.  The mania for table-turning and rapping had migrated from the United States to England following the widely publicized case of Margaret and Kate Fox, two young sisters in Hydesville, New York, who in 1848 claimed to have communicated with spirits through knockings in their house and furniture.  After emigrating to London in 1852, the American spiritualist Mrs. Hayden instilled a passion for séances that was soon fueled by other mediums. This “epidemic” (“Spirits and Spirit-Rapping” 30) was well established in Britain by 1853, when communing with the dead through objects became all the rage.

Whether solicited through an organized séance led by a (more or less) professional medium or acting of their own volition, domestic things suddenly, and often erratically, became animated.  As an article from the Westminster Review describes the state of affairs:

[T]here is hardly a piece of domestic furniture that does not perform the most extraordinary and equally well-attested feats.  Tongs and pokers leave their places, and pile themselves on the tops of beds; plated candlesticks, bent upon suicide, beat themselves to pieces on the floor; in a bedroom, to which no one is supposed to have access, lay figures are found made up of articles of clothing, stuffed to represent men and women in different positions, some with bibles in the attitude of prayer; brushes and tumblers of water rise from their places, dash through the window-panes, and fall in the street.  Such movements, in many cases, are quite spontaneous, no one demanding or expecting them.  Sometimes they seem to arise from mere superabundance of energy, as when a lamp jumps from the mantelpiece to the middle of the floor; sometimes from a love of practical joke, as when pitchers full of water pass through rooms, and empty themselves into beds, or when a tea-kettle goes and hides itself in a cellar; sometimes, as if from a frenzy of drunken violence, as when saucepans and broom-handles, without the slightest provocation, make desperate assaults upon bedsteads, not always a very gentle race, as we have just seen, and come off with fractured limbs for their pains. (“Spirits and Spirit-Rapping” 43)

Such accounts of spirit mishaps, whether delivered with skepticism or belief—or, as was often the case, with a little of both—depict the chaos that ensues with the animation of household objects.  Haunted things misbehave. They throw interiors into disarray, pull juvenile pranks, irreverently mimic human behavior, and, in the case of the suicidal candlesticks, self-destruct.  These “freaks of furniture,” as an article from Punch refers to them (“Clerical Table-Turners”), attest to the dangerous energy that could be released from ordinary objects. 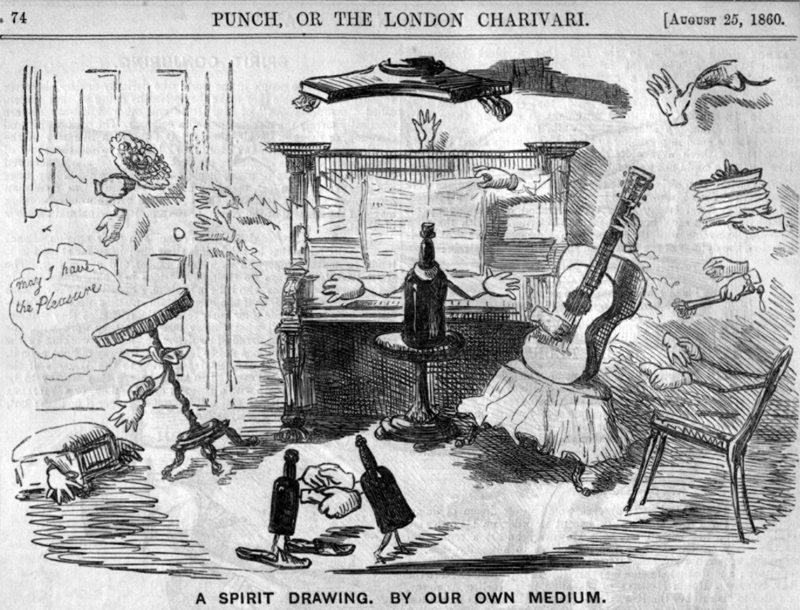 My essay contends that the animation of manufactured things became central to discussions about labor in the mid-Victorian period.  Drawing from contemporary debates on spiritualism, design reform, commodity production, and energy conservation, I argue that believers in ghosts and skeptics generated a productive framework to come to terms with the fraught labor histories hidden in everyday objects.  This piece is part of a book manuscript, titled “Impossible Ghosts: Material Culture at the Limits of Evidence,” that examines several contexts in which materiality at once tests and upholds the Victorian belief in spirits.  In addition to the topic of this essay, animated furniture, I explore spectral gifts brought during séances, spirit hands, ghostly clothing, and phantom transportation as important focal points in understanding the surprisingly substantial world of nineteenth-century spiritualism.  It is one thing to believe in ghosts, but quite another to prove that they can bring gifts of food or flowers, wear clothing composed of tangible fabrics, touch the living with warm hands, or ride in spectral carriages and coaches.  At the same time, these material phenomena provided tactile, and often portable, evidence for believers of the existence of an afterlife.  My book project studies the arguments of believers and skeptics alike, arguing that at their intersection there emerge discussions of material culture and political economy that illuminate the everyday (but no less elusive) world of Victorian England.

Aviva Briefel is Professor of English and Cinema Studies at Bowdoin College. She is author of The Deceivers: Art Forgery and Identity in the Nineteenth Century (Cornell UP, 2006) and The Racial Hand in the Victorian Imagination (Cambridge UP, 2015), and coeditor of Horror after 9/11: World of Fear, Cinema of Terror (U of Texas P, 2012). She is currently working on a manuscript titled “Impossible Ghosts: Material Culture at the Limits of Evidence.” 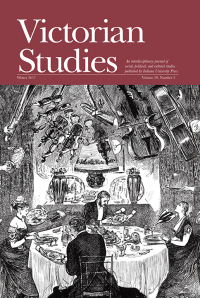 From Dispossession to Dissection: The Bare Life of the English Pauper in the Age of the Anatomy Act and the New Poor Law
Sambudha Sen

After the Letter: Typographical Distraction and the Surface of Morris's Kelmscott Romances
Aaron Donachuk

Love Among the Archives: Writing the Lives of Sir George Scharf, Victorian Bachelor by Helena Michie and Robyn Warhol
Review by: Trev Broughton

Forget Me Not: The Rise of the British Literary Annual, 1823–1835 by Katherine D. Harris
Review by: Jill Rappoport

The Making of Modern English Theology: God and the Academy at Oxford, 1833–1945 by Daniel Inman; Victorian Christianity at the Fin De Siècle: The Culture of English Religion in a Decadent Ageby Frances Knight
Review by: Timothy Larsen

Philanthropy and the Funding of the Church of England, 1856–1914 by Sarah Flew; Anglican Clergy in Australia, 1788–1850: Building a British World by Michael Gladwin
Review by: Stewart J. Brown

Disillusioned: Victorian Photography and the Discerning Subject by Jordan Bear
Review by: Daniel A. Novak

The Story of Alice: Lewis Carroll and the Secret History of Wonderland by Robert Douglas-Fairhurst
Review by: Donald Gray

Beastly encounters of the Raj: Livelihoods, livestock and veterinary health in North India, 1790–1920 by Saurabh Mishra
Review by: Angela Thompsell

Writing the Frontier: Anthony Trollope between Britain and Ireland by John McCourt
Review by: Elsie B. Michie

The Demographic Imagination and the Nineteenth-Century City: Paris, London, New York by Nicholas Daly; By Accident or Design: Writing the Victorian Metropolis by Paul Fyfe
Review by: Emily Steinlight

Women and the Railway, 1850–1914 by Anna Despotopoulou; Transport in British Fiction: Technologies of Movement, 1840–1940 by Adrienne E. Gavin and Andrew F. Humphries
Review by: Daniel Martin

Vice and the Victorians by Mike Huggins
Review by: Susan Zieger

Murder, Mayhem and Music Hall: The Dark Side of Victorian London by Barry Anthony
Review by: Peter Bailey

On Flinching: Theatricality and Scientific Looking from Darwin to Shell Shock by Tiffany Watt Smith
Review by: Philipp Erchinger

Changing Hands: Industry, Evolution, and the Reconfiguration of the Victorian Body by Peter J. Capuano; The Racial Hand in the Victorian Imagination by Aviva Briefel
Review by: Mary L. Mullen

I Hope I Don't Intrude: Privacy and its Dilemmas in Nineteenth-Century Britain by David Vincent
Review by: Peter W. Sinnema