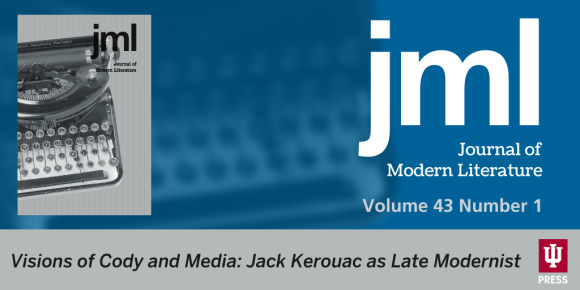 Kathryn Winner’s article, “Visions of Cody and Media: Jack Kerouac as Late Modernist,” from the Journal of Modern Literature’s newest issue, is now available on JSTOR & Project MUSE. Below, Winner discusses how the Beat-generation author Jack Kerouac used his celebrity status to take up and respond to emerging communication media.

Sometime in 1958, Beat author Jack Kerouac and prime-time television personality Steve Allen made an experimental spoken word LP together: Kerouac performs his poetry as Allen plays piano. Several months after recording, they brought this act to The Steve Allen Show. Kerouac does a short, awkward interview, then a reading, all while Steve Allen plays cool jazz riffs—you can view it here: https://www.youtube.com/watch?reload=9&v=3LLpNKo09Xk. It’s supposed to be just like the album, except Kerouac is asked to read On the Road instead of poems. (Kerouac’s prose, Allen muses during the interview portion, is very much like poetry anyway).

By the time Kerouac went on Allen’s show, On the Road was popular. Reviewers in major newspapers and magazines had already praised Kerouac’s style with a kind of high-minded hipness or dismissed his work as a boring or deranged adolescent stunt. To his viewers, Steve Allen describes On the Road as a “powerful and successful book.” He also describes Kerouac himself as “a celebrity,” which is a funny, ambivalent thing for the host of a national television program to say about the special guest.

Allen’s audience has heard of Kerouac, but probably don’t care very much about the poems. This is what makes it so interesting that, as Kerouac stares at the first page of a copy of On the Road, he recites, apparently from memory, prose pulled from another novel, called Visions of Cody. Nobody in Allen’s audience could have heard of this novel. Kerouac sent the manuscript to publishers and friends, but they thought it was a tedious and pointless impression of James Joyce, so it wasn’t published until after Kerouac’s death. What the audience has heard, because Steve Allen has just explained it to them, is that On the Road was written extremely quickly; that the author typed it in a matter of weeks on a single sheet of teletype paper; that it was a spontaneously produced account of a real road trip, of an actual lifestyle; that it embodied the spirit of a new social movement. And then they unknowingly watch Kerouac deliver lines from this ornately formal, self-consciously late-modernist, completely different novel about media.

My JML article, “Visions of Cody and Media: Jack Kerouac as Late Modernist,” argues that Visions of Cody helps us ask a good question about On the Road and about literary culture: is that famous novel, written in this famous way, possible? And why do people want it to be? This work is part of a larger project that explores how the concept of the “Beat author” is linked to the fact that tape recorders and cameras grew significantly more accessible, portable, and sophisticated between the late fifties and the early seventies. The lives and writings of Beat authors were embedded in a waning modernist literary culture and a newly electric US star system; their experiments with media are a manic response to a complicated crisis of literary significance.

Beneath the Kerouac/Steve Allen video on YouTube, “bawoman” commented in 2018, “I can’t stop watching it, and feel that I was born in the wrong time. Im [sic] in my 30s, I have an i phone and a smart tv and a twitter account that I hate but waste way too many hours on and I listen to my music on my paid Spotify premium account, yet I never stop feeling displaced.” Reading, watching, and listening to the Beats can remind us of our own access to technologies of reproduction—increasingly portable, personal, affordable, unavoidable. These media continue to refashion the relationship between ordinary people and celebrity culture; they produce impossible, contradictory desires: for spontaneity and immediacy, for visibility and legibility. Which is to say, it would make perfect sense for you to watch this video and get introspective about your Twitter account.

Kathryn Winner is a PhD candidate in the English Department at Stanford University. Her dissertation examines the emergence of hi-fidelity electric technologies in the mid-twentieth century and their effect on US (literary) stardom.