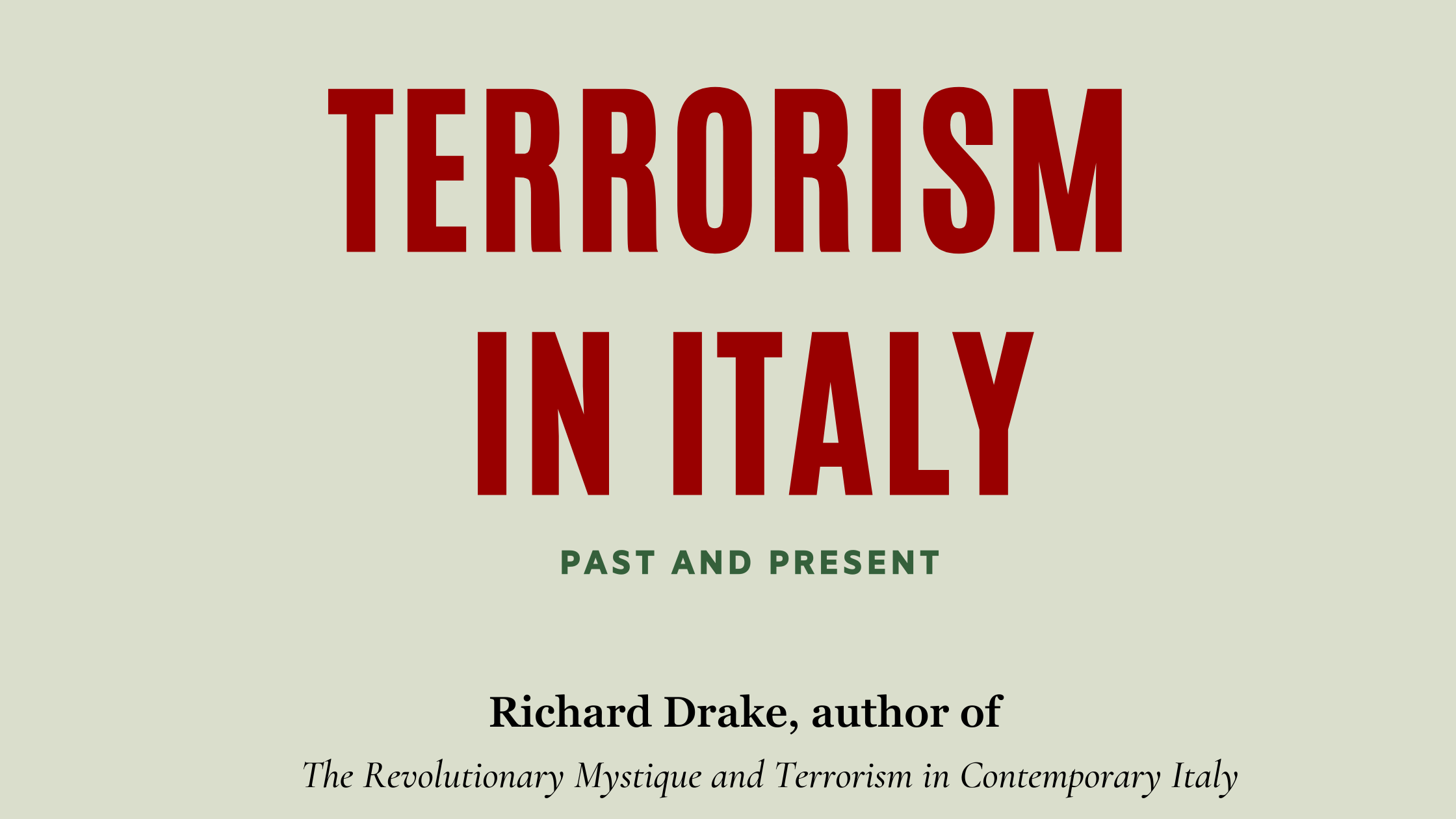 The following is a guest blog post by Richard Drake, author of The Revolutionary Mystique and Terrorism in Contemporary Italy.

Prior to 9/11, the question of Italian terrorism primarily concerned indigenous groups of the radical left and right. Since then, the threat of radical Islamic terrorism has almost entirely replaced these earlier fears. Recent editions of Country Reports on Terrorism, an annual publication of the U.S. State Department, feature the violence engendered by Islamic fundamentalism and have little to say about other problems in Italy. The Corriere della Sera, the country’s major national newspaper, reports extensively on Muslim extremism, especially since the spectacular terror attacks of 2015 in Paris and of 2016 in Brussels. Muslims from Italy have joined ISIL in Syria, sparking fears that returning extremists will bring jihad back with them. Government authorities fear the spillover effects of the chaos that engulfed Libya in 2011 following the NATO assault on the government of Muammar Gaddafi. Large numbers of refugees from Libya and other North African countries have arrived in Italy. Many Italians worry about the problems of crime and terrorism that they associate with Muslim immigrants. The Camp of the Saints, Jean Raspail’s 1973 dystopian novel about an invasion of Europe by Third World immigrants, has enjoyed a revival in Italy as elsewhere in Europe.

Why, in view of the current situation in Italy should there be a need for a second edition of a book originally published more than thirty years ago about terrorist activity no longer perceived to be a threat? A new introduction bringing up to date the story told in the book is one answer to this question. Also, the book has renewed relevance in the light of current Italian developments. In a 24 August 2014 interview, Minister of Interior Angelino Alfano observed that in jihadi literature, Italy is cited as an enemy for its association with the United States and as the center of Western Christianity, as well as revenge for the country’s exploitation of Libya during its period of imperialist control there. In his first declaration after becoming ISIL Caliph, Abu Bakr al-Baghdadi declared, “We will conquer Rome.”

But there are also fears of a possible combination of religious radicalism with secular radicalism arising from disillusionment and despair over Italy’s economic crisis featuring persistent high unemployment of 10 to 12 percent and 40 percent youth unemployment. A recent report revealed that one million Italian children live in absolute poverty. Carlo De Benedetti, the longtime head of the Olivetti Corporation, declared on 28 September 2016, “Work is the only thing that counts; the rest is superstructure. Work is dignity. A country without work sooner or later will experience social disturbances and upheavals.” Another corporate executive, Fiat’s Cesare Romiti, said on 9 October 2016 that he feared what might come of Italy’s economic problems: “I am anguished for my country, especially over public indebtedness and unemployment. There is no work; therefore, there is nothing.” Ernesto Galli Della Loggia, a front-page columnist for the Corriere, recently declared, “Italy is falling apart.” Unemployed young people are leaving in droves. The physical infrastructure of the country is collapsing. Disorderly conduct is increasing. Covid-19 has exacerbated all these problems.

The Revolutionary Mystique and Terrorism in Contemporary Italy reappears at a moment when it might be a resource for people trying to understand the country’s revolutionary traditions, right and left. These ideological belief systems inspired radicals during the so-called years of lead, from the late 1960s through the late 1980s, and might in some form or other become adapted to new uses. There are lessons from these years that might enable us to overcome terrorist challenges of today and tomorrow.

Richard Drake is the Lucile Speer Research Professor in Politics and History at the University of Montana. His other book publications are Byzantium for Rome: The Politics of Nostalgia in Umbertian Italy, 1878-1900, The Aldo Moro Murder Case, Apostles and Agitators: Italy’s Marxist Revolutionary Tradition, The Education of an Anti-Imperialist: Robert La Follette and U.S. Expansion, and Charles Austin Beard: The Return of the Master Historian of American Imperialism.