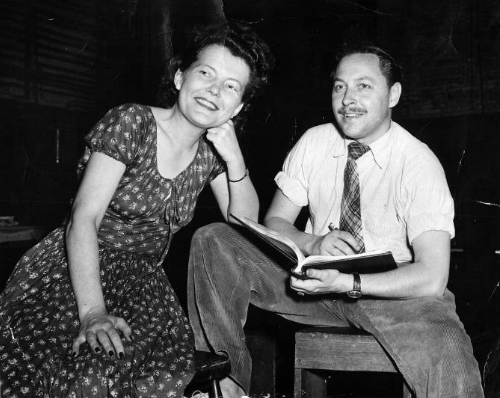 Becoming Laura: The Impact of Tennessee Williams’s Revisions of You Touched Me! on The Glass Menagerie, 1942–43

By John S. Bak, author of “Tennessee Williams’s ‘“Homage to Ophelia” (A Pretentious Foreword)’ with Commentary,” a read-for-free feature on JSTOR .

During the summer of 1939, Tennessee Williams was obsessed with D.H. Lawrence, and “conceived a strong impulse to write a play about him—his life in America” (Notebooks 155). To gather material for the play, Williams travelled to Taos to meet Frieda Lawrence. Though that full-length play was never realized, Williams did quickly pen several shorter works, including a lyric poem “Cried the Fox; For D.H.L” (1939), and four one-act plays: “A Panic Renaissance in the Lobos Mountains (ca. 1939), Adam and Eve on a Ferry (ca. 1939), The Night of the Zeppelin (ca. 1939-40), and I Rise in Flame, Cried the Phoenix (1941). It was only natural, then, after reading Lawrence’s 1922 short story “You Touched Me” in March 1942 that Williams would set out, with his friend and collaborator Donald Windham, to adapt it for the stage. (Williams wrote most of the play, with some help from Windham and, occasionally, input from their friend Paul Bigelow [Letters I 419-20; Notebooks 297].) The paper trail leading to the eventual foreword to that play, “Homage to Ophelia”—published for the first time in JML 44.1—recounts a much more complex period in Williams’s life during a time when work on the war comedy You Touched Me! greatly influenced the writing of his first masterpiece, The Glass Menagerie.

Despite their collaboration and eventual 50/50 share of percentage rights, Williams quickly wrested artistic control of the project and, by May 1942, “finished” a first draft of the comedy (Letters I 376). This version of the play had not yet strayed far from Lawrence’s original story, but that would not last for long. By 14 June, Williams began integrating elements of Lawrence’s novella The Fox into the play, since it is “basically the same story as ours, the two women and man triangle, only these two women are not sisters but out and out “Lesbos” and the boy kills the rival by chopping a tree down to fall on her” (Windham, Letters 29). Ten days later, Williams completed writing “the fox into the play” for dramatic and symbolic reasons germane to his own evolving dramaturgy, and he completed the second draft of play in July, while visiting friends in Macon, Georgia.

Williams’s agent Audrey Wood soon asked Alan Collins, an agent for the Lawrence estate, to weigh in on the play. Collins found Williams’s Matilda’s fear of the world “unexplained and not understandable” (Windham, Letters 45), and even suggested that the play’s setting be moved back to the 1890s during the Boer War to explain her recalcitrant nature (Letters I 401). At this point, however, the play was still about two sisters, as Williams makes clear in his letter to Wood dated 1 September 1942: “I think I could make those girls, by direction, seem believably 20th century” (Letters I 401). Williams had not yet made Matilda fully Rose-like (after his institutionalized sister), nor his Emmie like Edwina (his domineering mother), the puritan dowager who stifles the younger girl’s passions, though early resemblances were palpable.

By October 1942, Williams  felt the play was completed, but additional advice from John Gassner, a manuscript reader for the Theatre Guild, prompted Williams to revise the script yet again, incorporating changes to update the story’s and the play’s original World War I setting to current war times.This “third and final” re-write was completed in early November 1942 (Notebooks 331), and Williams seemingly did not touch the play while it was making the rounds with potential producers (e.g., Mary Hunter’s American Actors Company, Gordon Carter’s St. Louis Civic Theatre).

At the end of January 1943, when Carly Wharton finally put down a $200 option on the play and demanded further changes, Williams no doubt began seeing his initial “escape” for Matilda at the end through love and marriage overly romanticized, and incorporated, by mid-March, new modifications to the ending in what was now his “fourth revised edition” of the play (Letters I 433). This brief interlude between January and March, however, should not be underestimated in terms of its impact on the play’s revisions, nor on the concurrent drafting of a new play what would eventually become The Glass Menagerie; for it was during this time that Williams first learned of a lobotomy performed on his sister Rose on 20 January, as Edwina informs her son: “Now that it is over [. . .] I can tell you about Rose who has successfully come through a head operation” (qtd. in Leverich 480). Williams replied to Edwina a few days later on 25 January: “I did not at all understand the news about Rose. What kind of operation was it and what was it for? [. . .] Please let me know exactly what was done with Rose [. . .]” (Letters I 429). He wrote nothing about Rose’s operation in his personal notebook for that day, however, and would avoid doing so for months to come, until on March 24 he broke his silence:

A knife thrust in her brain.

This pained entry is perhaps the best extant proof of what would become Williams’s life-long struggle over having abandoned Rose to avoid his own onset of madness and to fulfil himself artistically.

Williams soon afterward completed a new, more dramatic ending to You Touched Me! To what extent his final revisions of Matilda contain traces of a post-lobotomized Rose remains conjecture. Only a close genetic reading of the manuscripts of the play, which is beyond the scope of this short piece, could begin to unravel how Williams saw Matilda’s fate during these months evolving alongside Rose’s. I would argue that, in place of this genetic reading for the time being, we could nonetheless extrapolate that evolution in her by examining a similar evolution in Laura Wingfield, whose fate in The Glass Menagerie was also (mostly) sealed by the spring of 1943. As any history of both plays’ compositions would eventually reveal, the pain that Williams was undoubtedly experiencing in these three months was instrumental to the changes he would incorporate into You Touched Me! over the next eight months, changes that also affected those he made to The Glass Menagerie and, by extension, to “Homage to Ophelia.”

Williams, Tennessee, and Donald Windham. You Touched Me! A Romantic Comedy in Three Acts. French, 1947.

John S. Bak ([email protected]) is professeur at the Université de Lorraine in France and holds degrees from the University of Illinois, Ball State University and the Sorbonne in Paris. He was a Fulbright Scholar to the Czech Republic in 1995 and Visiting Fellow at Harvard (2011), Columbia (2013), University of Texas at Austin (2014), and Oxford (2014-16). His commentaries on Williams’s nonfiction have appeared in several journals over the years. His edited books include Tennessee Williams and Europe (Rodopi, 2014) and New Selected Essays: Where I Live (New Directions, 2009). He is also the author of the monographs Ernest Hemingway, Tennessee Williams, and Queer Masculinities (Fairleigh Dickinson, 2009) and Tennessee Williams: A Literary Life (Palgrave, 2013).

TABLE OF CONTENTS FROM JML 44.1

Genealogies of the Modern