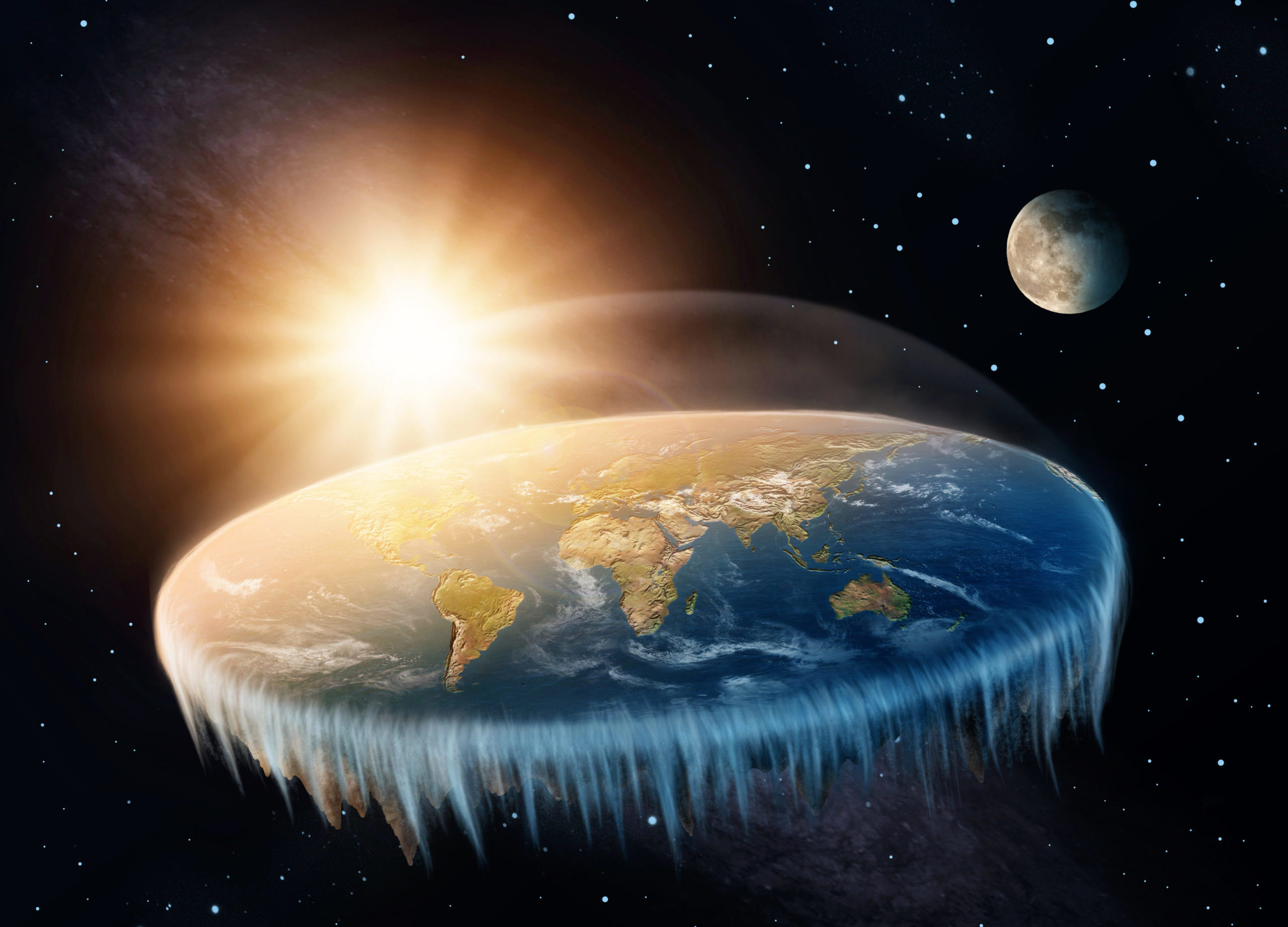 The following is an excerpt from the first chapter of Weird Earth: Debunking Strange Ideas about Our Planet by Donald R. Prothero.

Donald R. Prothero is the author of numerous books and scientific papers including UFOS, Chemtrails, and Aliens: What Science Says, Reality Check: How Science Deniers Threaten Our Future, and Abominable Science! Origins of the Yeti, Nessie, and Other Famous Cryptids.

The Science of the Earth

Like it or not, we all live in an age of science and technology. Science has utterly transformed the lives and fates not just of humans but of all organisms on the planet. Just look at what science has given us. Only 150 years ago, most children died in childbirth or through incurable childhood diseases. Today, thanks to modern medicine, nearly all children in the developed world survive their birth and early years. We take for granted that most of us carry a device in our pocket that is more powerful than a room-sized computer from only fifty years ago; it also performs as a phone, pager, clock, calculator, and video and audio player and has many other functions. Until the invention of the steam locomotive and then even faster transports, no human could travel any faster than a horse could run. Now we all routinely travel at 65 miles per hour on highways, and many people have flown and traveled faster than sound. Our lives are so completely dependent on the miracles of science and technology that we don’t even think about them anymore. We are aware of our dependence on them only when we lose them, such as during a power outage or an earthquake or other natural disaster.

Likewise, over the past two hundred years, the scientific method has been applied to the study of the earth, and its progress has led to great discoveries. We now know of millions of extinct animals that lived long before humans ever appeared. We can date rocks with high precision and can estimate the age of the origin of the earth and solar system at 4.56 billion years. We know what shapes the surface of the earth, what is beneath the surface, and how continents move around the earth’s surface. Instead of viewing earthquakes as a sign of the wrath of the gods, we understand what causes them and have made enormous strides in understanding and preparing for them, if not predicting them. Modern society runs on coal, oil, natural gas, and uranium, as well as valuable materials like gold, silver, copper, and platinum, and it depends on resources like steel, stone, and concrete. These discoveries and technologies were made possible only by the application of the scientific method to earth sciences by scientists curious to know how the earth worked.

We are completely and utterly dependent on science and technology for our survival, yet we find that even in the most developed countries of the world, a significant number of people reject some aspect of science because it conflicts with deeply held beliefs. They love what science gives them (such as health, technology, and wealth) but reject science when it tells them something they don’t want to hear. But we don’t get to make that choice. Science is not a restaurant menu that you can pick and choose from. As science educator Bill Nye said, “The natural world is a package deal; you don’t get to select the facts you like and which you don’t.” Or as astrophysicist Neil deGrasse Tyson said, “When different experiments give you the same result, it is no longer subject to your opinion. That’s the great thing about science. It’s true, whether or not you believe in it. That’s why it works.”

This is particularly true when science finds out something that goes against what we want to believe—what Al Gore aptly called “inconvenient truths.” Scientists don’t get to pick and choose what they want to believe when they are doing research. They are obligated by their training as scientists to report their results, no matter how much it might go against what they wish to be true. Science tells us that we are a product of evolution and that we are closely related to the apes, that humans are insignificant on the scale of the cosmos or in the framework of geologic time, and that humans are destroying the planet through pollution and especially climate change. These things are not comfortable or easy to live with and may be a blow to our notions of cosmic importance—but they are true because that’s what the evidence shows.

Scientists are not spoilsports or killjoys, and we don’t take pleasure in shattering illusions. Despite what some science deniers claim, there’s no incentive for scientists to tell you bad news. We don’t get more grant dollars for telling you the grim truth about climate change or discovering more evidence of your close relationship to the apes. If a scientist tells you an “inconvenient truth,” it is because a scientist must do so as a part of honest, objective reporting of what the data show. An amusing online cartoon shows a variety of scientists speaking inconvenient truths and being punished for it—from Archimedes being killed by the Roman soldier as he did his geometry, to Bruno being burned at the stake for saying the earth is not the center of the universe, to Darwinian evolution, to Einsteinian relativity. The final panel says, “Science: if you ain’t pissin’ people off, you ain’t doing it right.”

Science is essential to our daily lives now, but very few people actually understand what it is or how it works. The media feed us a diet of stereotypes, especially the classic “mad scientist” trope, complete with the white lab coat, the sparking apparatuses and bubbling beakers, wild hair, and maniacal laugh. But most scientists don’t wear white lab coats. I haven’t worn one since I took chemistry lab in college, and the only scientists who need them are those who work with stuff that might splash on their clothes, such as chemists and medical personnel. No, scientists aren’t defined by the color of the coat they wear or the gizmos they work with. They are defined by what is in their heads and how they think.

Science is a way of thinking about the world, not how you dress or what toys you play with. Science is thinking critically about phenomena in the natural world and trying to find ways to test hypotheses, or preliminary explanations, about how the world works. As the philosopher George Santayana wrote, “Science is nothing but developed perception, interpreted intent, common sense rounded out and minutely articulated.”4 All science is about testing hypotheses and finding out their validity by further observations and experiments. Scientists generally aren’t trying to prove their hypotheses but to disprove them. As British philosopher Sir Karl Popper pointed out many years ago, it’s far easier to prove a hypothesis wrong (falsify it) than it is to prove it right (verify it). The famous example is the classic philosophical statement “All swans are white.” No number of white swans proves that statement true, but a single nonwhite swan proves it false. Indeed, there are black swans in Australia (fig. 1.1). If your hypothesis has been tested and found false, you must abandon it and move on to another explanation—perhaps one suggested by your previous failure. Popper titled one of his books Conjectures and Refutations, a nice summary of the scientific method in a single phrase.

This idea surprises a lot of people, but it is true. Strictly speaking, science is about proving ideas wrong and moving on, not proving them right. Scientists are not looking for “final truth” or proving something “absolutely true.” Scientific explanations must always be open to further scrutiny and testing; they are tentative and must be capable of being rejected. As the famous philosopher Bertrand Russell wrote, “It is not what the man of science believes that distinguishes him, but how and why he believes it. His beliefs are tentative, not dogmatic; they are based on evidence, not on authority or intuition.”5 Whether religious, political, or social, ideas that cannot be tested are not scientific; they are dogma. This immediately distinguishes science from many other areas of human thought. For example, we might say that “Zeus caused the lightning and thunder,” but this is a religious belief. It is not a testable scientific idea. Marxism and many other dogmatic worldviews also make broad statements about the world that cannot be tested but are articles of faith among the believers, so nothing would ever prove them false. When dogmatists (religious or otherwise) have their sacrosanct ideas challenged, they will not admit that the idea has been falsified. They stubbornly insist they are right, or they find some dodge to salvage at least some of their false notions.

Continue reading the rest of the chapters in Weird Earth: Debunking Strange Ideas about Our Planet by Donald R. Prothero.

Mireille F. Ghoussoub is a doctoral candidate in Materials Chemistry in the Chemistry Department at the University of Toronto and is the co-author of The Story of CO2: Big Ideas for a Small Molecule. Mireille will talk about the importance of university press publishing.

You can participate online in University Press Week with the hashtags #RaiseUP, #ReadUP, and #AUPresses20.