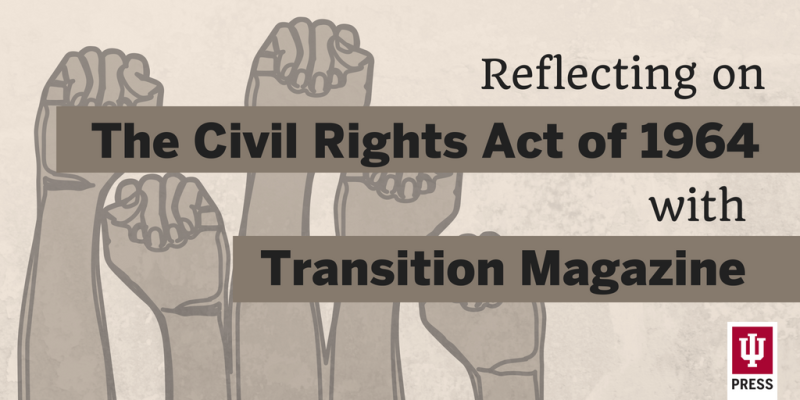 Today marks the 54th anniversary of The Civil Rights Act of 1964 – the landmark civil rights and US labor law in the United States that outlawed discrimination based on race, color, religion, sex, or national origin and prohibited unequal application of voter registration requirements, racial segregation in schools, employment, and public accommodations.

In honor of this historic event and current trends, we invite you to explore Transition Magazine’s 1972 conversation with James Baldwin, and a discussion of more than five decades of black action in St. Louis, from the Civil Rights Movement to Black Lives Matter.

Although the activism of Martin Luther King, Jr. and Malcolm X continues to receive the most attention, Fredrick Harris argues that James Baldwin is better situated to explain why black Americans continue to be pressed to the margins of American society.

History tells us that it takes, and that it will take, generations of striving, organizing, and mobilizing to fight for the kind of world that we want to see. And these distinct generational approaches play out in all of your work within the black liberation movement. The following excerpt is taken from a panel discussion at Harvard University on December 3, 2015 organized by The Charles Warren Center with support from the Hiphop Archive and Research Institute. Moderated by Professor Elizabeth Hinton, panelists Percy Green II, Robin D. G. Kelley, Tef Poe, George Lipsitz, and Jamala Rogers examine the achievements and challenges of more than five decades of black activism in St. Louis, Missouri.

The Problem of Citizenship, the Question of Crime, and the Origins of the Civil Rights Movement

"Hammering at the Truth"

Transition is a unique forum for the freshest, most compelling ideas from and about the black world. Since its founding in Uganda in 1961, the magazine has kept apace of the rapid transformation of the African Diaspora and has remained a leading forum of intellectual debate. Transition is a publication of the Hutchins Center at Harvard University, edited by Alejandro de la Fuente.