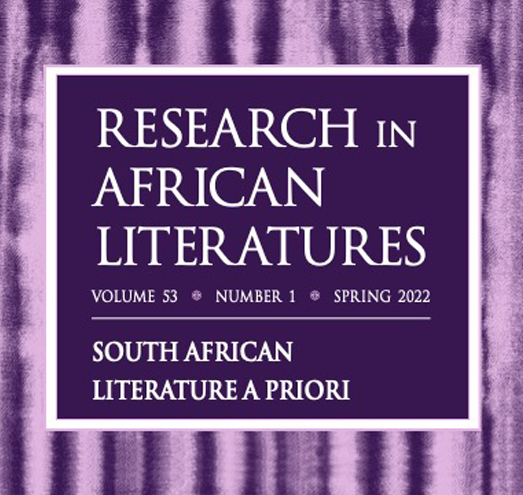 By Cate McClure, Assistant Editor for Research in African Literatures and Spectrum: A Journal on Black Men.

Literature has been marked and sorted by time. However, when life-changing events affect a nation, continent, or the world, the writing of the region changes to reflect the new complications brought about by this event. One such shift can be seen in South African compositions published after the 2012 massacre in Marikana, South Africa. Research In African Literatures (RAL), a peer-reviewed journal focusing on the examination of worldwide African literature, hopes to examine how themes in South African literature have shifted in the ten years following Marikana within its special issue South African Literature a Priori, coedited by Ronit Frenkel and Sikhumbuzo Mngadi. This edition, vol. 53, no. 1, of RAL, will be published in December 2022.

The Marikana massacre, the first major government-involved massacre since South Africa’s liberation, has left a lasting impact on South Africa. During this massacre, the South African Police Service killed 34 mine workers on strike against the Lonmin platinum mine. The strikers were protesting for a living wage and to improve their poor housing and working conditions. In addition, police injured 78 protestors and arrested 250 strikers. In the days leading up to the massacre, ten people—including miners, police, and security—were killed. While police forces claimed they opened fire because the protestors started attacking, many eyewitnesses argued that police were not in danger from the miners. Following Marikana, the South African government opened the Marikana Commission of Inquiry to investigate the event; the commission absolved every key figure involved with the massacre of any crimes. However, ten years later, many strikers and families affected by Marikana have yet to receive justice or compensation for their losses.

The authors in this special issue tackle different issues relating to texts produced in South Africa. These researchers examine the mediums in which these writings were published. Some analysts focus on literature written by novelists, and others comment on pressing issues published in blogs. Many of the scholars hone in on the works of one author. Andrew van der Vlies examines Zoë Wicomb’s Still Life through transitional, post-, and post-post-transitional lenses. Danyela Dimakatso Demir also analyzes one author’s work in her essay featuring Lesego Rampolokeng’s Bird-Monk Seding.

Cate McClure is an assistant editor for Research in African Literatures and Spectrum: A Journal on Black Men. She currently studies at The Ohio State University and hopes to graduate with an undergraduate degree in English Literature, Film, and Popular Culture Studies in the spring of 2023.