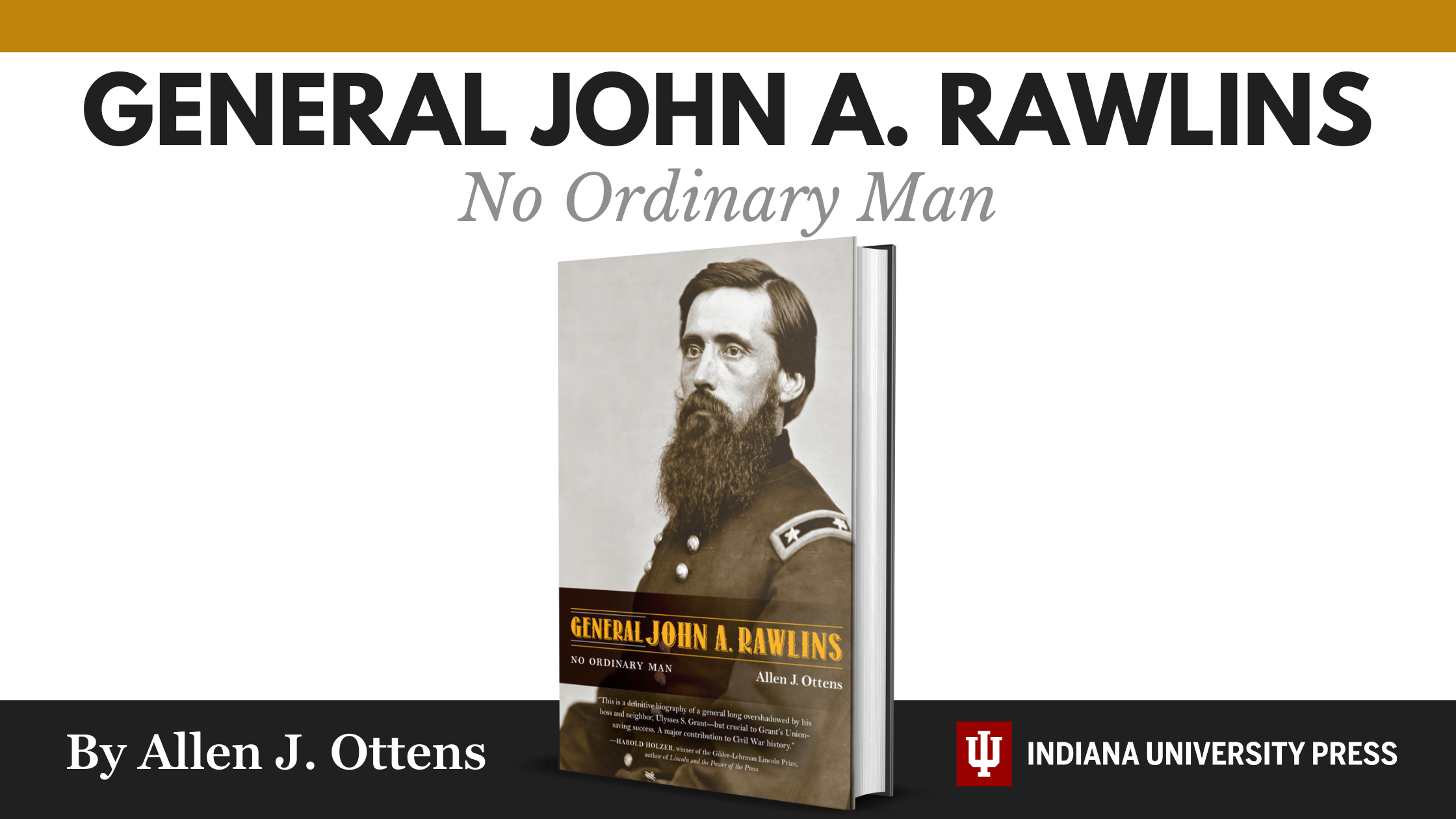 No visitor to the Galena (IL) and U.S. Grant Museum can overlook the centerpiece of its collection: Thomas Nast’s mammoth “Peace in Union” painting of the surrender at Appomattox. Of course, Grant and Lee are the focal points of this iconic artwork, and around them is a host of supporting military figures. Probably the most noticeable of this supporting cast is the luxuriantly-bearded general standing erect and behind Grant’s right shoulder. That general is John A. Rawlins, the man who accompanied Grant from Galena to Appomattox to the White House, serving along the way as his friend, adviser, chief-of-staff, and first secretary of war. All things considered, Rawlins is appropriately positioned on that canvas. Nast got it just right.

Despite the rash of biographical studies of Grant as general and president over the past couple of decades, very little attention has been paid to his invaluable adjutant, whom Grant himself deemed “no ordinary man.” If anything, Rawlins is owed his due.

As Rawlins is remembered these days, it is either as the temperance fanatic who kept Grant sober or as the real “brains” behind Grant’s success. This one-dimensional caricature of Rawlins is unfair to both him and Grant. It is true that Rawlins could cluck that his interventions “sustained” Grant, but Grant had more control over his appetites than most believed. Where Rawlins more likely succeeded was in helping to ease the minds of those (i.e., President Lincoln and Secretary of War Edwin Stanton) who had invested so much responsibility in Grant. “If Rawlins is on the prowl through the camp, we can rest easy about Grant,” is how such thinking might have gone. Regarding Rawlins’s exaggerated advisory influence on Grant, Adam Badeau, a fellow staff officer who was close to both, said, “It did not take Grant and Rawlins to make Grant, as some have said, who knew neither intimately. Rawlins would have been the first to repel the pretension.” In this biography, I have more to say about Rawlins on both of these scores while I draw a more balanced and multi-dimensional picture of  him as a lawyer, emerging Democratic Party figure in Northwest Illinois, bulwark of Grant’s staff, and cabinet member. I also provide a bit of backdrop regarding the historic town of Galena in which Rawlins established his roots and which claims him as a favorite son.

After spending the better part of four years thinking and writing daily about John Rawlins, I’ve found him a sympathetic and admirable figure. I was moved by his efforts to rise above his impoverished upbringing as a charcoal-burner, and the suffering he and his family endured against the scourge of tuberculosis. Rawlins was Grant’s best personnel choice, a steady and hard-working presence who helped coordinate efforts to maneuver and manage Grant’s large armies. Badeau summed up two of Rawlins’s foremost qualities: “He was passionately patriotic, and would have died for Grant.” Those qualities and others were the reasons he was so beloved by his fellow officers of the Union’s Army of the Tennessee.

What impresses me most about John Rawlins is how he transcended his views about race to become a champion on behalf of the oppressed. In his magnificent “Platform Speech” delivered at Galena in June, 1867, he argued for all states to confer upon Blacks the right to vote. He envisioned how universal suffrage could work for the common good of the country and uplift the Freedmen: “And the African, elevated from the degradation of slavery, rendered respectable by his voice in government, admitted to all sources of intelligence, inspired by the same love of freedom, speaking the same language and worshipping the same God, will rise rapidly in the scale of knowledge and the cloud of ignorance that now envelopes him will as rapidly pass away, and he will not fail ‘to help keep the jewel of liberty in the family of freedom.’”

Such are the words of no ordinary man.

Allen J. Ottens is Professor Emeritus of Counselor Education and Supervision, Northern Illinois University. He worked as a psychologist at several university counseling centers. He is also a past president of the Manuscript Society. He has had a lifelong interest in the Civil War and Abraham Lincoln. He, his wife, and their green-cheek conure, Cisco, live in northern Illinois.