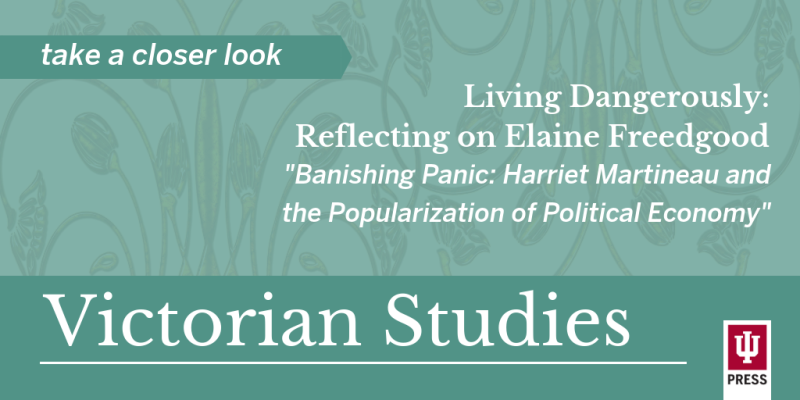 Elaine Freedgood has shaped the field of Victorian studies through her highly original thinking, meticulous research, beautiful, sometimes wry writing, and relentless work to support young scholars. Among other things, she has probed the shifting distance between the Victorian past and our present. In her groundbreaking book The Ideas in Things (2006), she argues for a practice of “strong metonymic reading”—or reading things in terms of their own characteristics, properties, and histories rather than as metaphoric objects subordinated to subjects—in part to acknowledge and theorize the “gulf of time and space” that separates us from Victorian readers (24). Strong metonymic reading does not simply recover lost meanings—the connections between Negro head tobacco and the elimination of Indigenous peoples, for instance—it demonstrates the very instability of interpretation: what we know, what we see, and how we read change over time.

More recently, Freedgood has been considering what Megan Ward calls the “historical middle”—the period between the Victorian past and the present we inhabit—to offer a stunning new account of the ways in which the embrace of classical realism as a coherent form has led us to forget the strangeness and messiness of the Victorian novel. In her forthcoming book, titled Worlds Enough, or Against Realism, Freedgood returns to nineteenth- and twentieth-century criticism of the novel to question just when and how the Victorian novel became ‘great.’ Hint: only retrospectively. Reconceiving the history of the Victorian novel, Freedgood rethinks the politics of the novel, literary form, and literary history as she interrogates what it means to feel at home in ontologically-flexible novelistic worlds.

Given Freedgood’s own work to reinvigorate the past to reflect on what and how we read, it is my great pleasure to return to her essay “Banishing Panic: Harriet Martineau and the Popularization of Political Economy,” first published in Victorian Studies in 1995. I do so in anticipation of a conference hosted by New York University on September 21, 2018 to celebrate Freedgood’s extraordinary career.

“Banishing Panic” became part of the first chapter of Freedgood’s Victorian Writing About Risk (2000), a book that questions the desire for safety by showing how danger is always displaced. The article turns to Harriet Martineau’s Illustrations of Political Economy to argue that in a moment of social unrest and uncertainty, Martineau seeks to assuage anxiety by naturalizing the laws of political economy. She does not teach readers to accept risk but rather to eliminate it. Martineau thus deals with the uncertainty of modernity and capitalism by doubling down on the certainty of political economic laws, in Freedgood’s account.

Reading this article now, I heard echoes of Hannah Gadsby’s recent stand-up special, Nanette. In this wildly-popular comedy act, Gadsby explains how jokes produce tension and then relieve this very tension. Teaching the audience about this two-part structure, Gadsby then refuses to reproduce it. Instead, she introduces tension that she does not alleviate so that the audience better understands the tension that “not normals carry around inside of them all of the time.” Long before Gadsby’s act, Freedgood similarly questions who feels tension and anxiety, why they feel it, how it is alleviated, and to what end. Feeling anxiety about capitalism is utterly rational: it is a cruel system that depends upon and reproduces inequality. As Freedgood shows, even most theorists of political economy in the nineteenth century understand capitalism to be tragic: they lament the conflicts capitalism produces and its deadly effects even if they ultimately embrace it. Martineau’s writing, however, works differently: it assuages anxiety—eliminates risk—by transforming anxiety about an unjust economic system into a utopian myth about the happy endings that will result if one obediently follows economic laws. However, the ease with which Martineau alleviates tension for middle class readers—the way in which she combines realism and myth—is ultimately why her writing has less of an impact over time. As Freedgood warns, there is “a need for anxiety to be heightened before it is relieved: perhaps because of this temporary heightening, the relief is more intense and more lasting” (36). Banishing panic without grappling with people’s very real anxiety about capitalism ultimately provides only fleeting comfort. Tellingly, Martineau’s text wasn’t especially popular among working class readers.

In characteristic Freedgood fashion, this article is about much more than Martineau: it thinks about reading as an affective process, analyzes literature’s short- and long-term political effects, and examines the intersection of gender, political economy, and domestic economy as well as the relationship between capitalism and colonialism. Throughout, Freedgood warns against easy solutions to complex political problems: both Martineau’s work to banish panic without representing real anxiety, and realist novels’ work to express contradictions that cannot be entirely resolved. For although realist novels assuage anxiety by having readers feel it—readers of realist novels must spend more time dwelling with difficulty—they, too, ultimately produce an illusory sense of safety by displacing danger onto others. The challenge, it seems, is to recognize the anxiety and uncertainty in the world without attempting to render it safe through fiction, myth, or displacement.

We, too, live in a historical moment when capitalism produces a great deal of anxiety and panic feels like a reasonable response. Freedgood’s article encourages us to inhabit this historical moment and grapple with its complexity without too easily replacing real dangers with fiction’s comforting narrative structures. In turn, Freedgood’s actions—her support of young scholars, willingness to fight unjust professional norms, and commitment to rigorous research while imagining the university and the profession otherwise—suggest that acknowledging anxiety, panic, and danger not only leads to a better understanding of history in all its contradictions, but also enacts forms of social relationality and collective care that refuse to follow the logic of capitalism. Through her work on and off the page, Freedgood demonstrates that although we cannot banish panic, we do not need to face it alone.

Read Elaine Freedgood’s “Banishing Panic: Harriet Martineau and the Popularization of Political Economy” for free on

Mary L. Mullen is assistant professor of English and faculty member in the Irish Studies program at Villanova University. Her research examines theories of history, education, and empire in the context of nineteenth-century English and Irish literature.