In February 2012 Kate Raworth, a senior research analyst with Oxfam in Britain, proposed a conceptual framework which brought the concept of planetary boundaries proposed by Johan Rockström and his colleagues at the Stockholm Resilience Centre, together with that of social and moral boundaries. Imagined as a global scale compass shaped like a doughnut, the framework aims to chart the course between sustainability on the one hand, and justice and equity between nations on the other. Raworth’s goal is to create a safe and just space between the social and environmental imperatives in which humanity can thrive. This, she writes, requires equity in the use of natural resources and greater efficiency in transforming those resources to meet human needs. 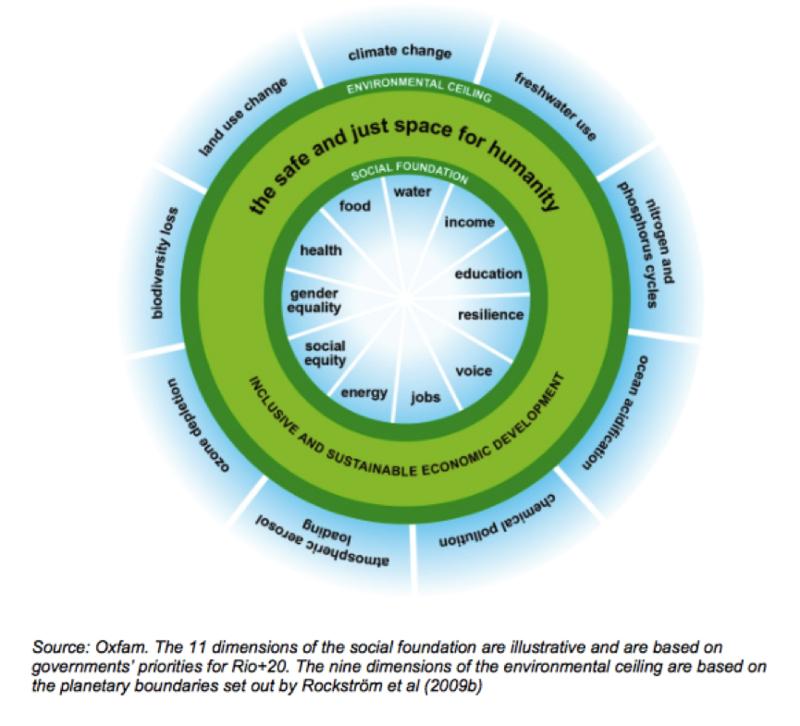 Agricultural scientists have long argued that industrial and mass agriculture is necessary to feed the planet’s rapidly expanding population, predicted to increase to nine billion people by 2050. But mass agriculture has primarily transformed diets, particularly in the developed world, increasing consumption of meat and dairy products and thus requiring large-scale animal and mono-cropping operations. In the future there will hopefully be more sophisticated, equitable and sustainable techniques used to feed the planet than those applied during the Green Revolution of the 1950s that relied on the breeding of high-yield crops, and application of pesticides and fertilizers. But what will not change is the manipulation and re-shaping of our natural environment for human consumption needs. Breaching the thresholds of the planet’s nine essential terrestrial, aquatic, atmospheric, and biogeochemical systems, including the nitrogen and phosphorus cycles, is what Rockström and his colleagues have strongly cautioned against in their model.

In the late 1800s when British, Australian, New Zealand, French, and German prospectors were scouring the Pacific looking for guano and phosphate rock supplies to manufacture phosphate fertilizer, they frequently used the phrase “for the good of humankind” to justify the destruction of island landscapes, the use of low-paid labor, and the displacement of communities and cultures. I think of Raworth’s attempts now to bring questions of equity and justice into conversation with those around food security, environmental and human sustainability and wonder how, specifically, the needs of small, indigenous groups fit into the equation when seven billion lives today and nine billion lives in the near future, are at stake.

Indigenous rights are now more widely recognized than they were on Banaba in Kiribati and on Nauru in the early 20th century when massive phosphate mines extracting millions of tons of phosphate were in full industrial swing. Banabans and Nauruans had lived in their home islands sustainably for over two thousand years, and yet their traditional knowledge of resilience and effective use of natural resources, like that of many indigenous peoples, was and is still not valued.

Today, Banaba in particular is a decimated landscape with rusted, dilapidated infrastructure and dozens of artifacts of science, progress and industry lying in a state of waste and ruin. My book, Consuming Ocean Island, takes a close, ethnographic, historical and multi-sited look at the lives of Banaban landowners, mining company workers, and the families of mining management alongside the transformation of a tropical island landscape into industrial hub and, eventually, mining ghost town. The science of global agriculture in the 20th century mandated that phosphate fertilizer was a key ingredient to fuel the chain of agricultural commodities, but at what costs, ethically and materially, to Pacific Islanders? As humanity seeks to find new technical solutions to food challenges, whose lives, lands and waterways will be improved or transformed, and whose will be ruined?

Katerina Martina Teaiwa is Head of the Department of Gender, Media and Cultural Studies and Pacific Studies Convener in the College of Asia and the Pacific at the Australian National University. Born and raised in the Fiji Islands, she is of Banaban, I-Kiribati, and African American heritage.