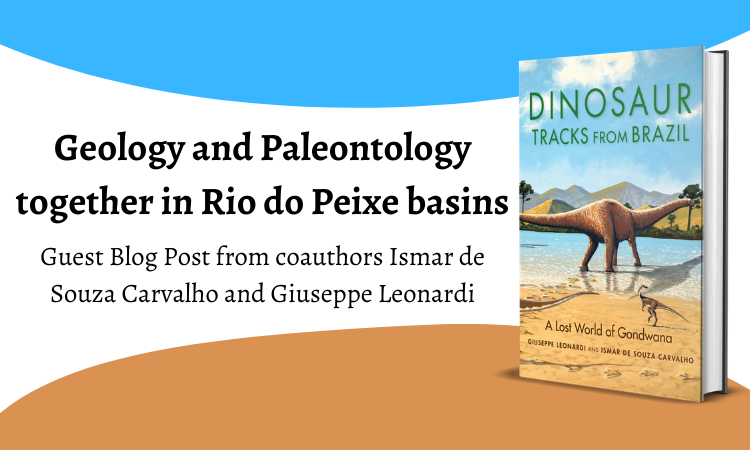 The following is a guest blog post by Ismar de Souza Carvalho and Giuseppe Leonardi, co-authors of Dinosaur Tracks from Brazil: A Lost World of Gondwana.

How was the geographical aspect of Earth 140 million years ago, during the Early Cretaceous? Certainly, very distinct from the present days. A great land mass, in the southern hemisphere agglutinated South America, Africa, India, Madagascar, Australia and Antarctica, in the Gondwana Supercontinent. It was a world in movement where many environmental changes took place. Although South America did not exist as a separated continent, and you could walk a few days afoot from the present Northeastern coast of Brazil and arrive in what is now the Western equatorial Africa, the breakup of these continents was in its first stages.

What kind of landscape and climate was there? It was hot, damp or arid depending on the location. Invertebrate, vertebrate and plant fossils give us many details on this past world (Figure 3.1).

In the interior region of Northeastern Brazil, as a result of the South Atlantic opening, some areas began to sink; from the side slopes of the depressions, flowed torrential rivers carrying pebbles, sand and mud that was settled on the bottom of alkaline lakes. On the shores of these lakes, as well as on the alluvial fans, the dinosaurs dominated the fauna and left their footprints (Figure 3.2), seemingly ephemeral and soon eroded. In fact, very often, these footprints and trackways were covered earlier (and then recorded and preserved for the future) by other sediments, quickly colonized by colonies of microorganisms that favored the conservation of the tracks.

What kinds of dinosaurs and other fossil animals are expected to be found in this remote area of South America? Certainly not the tyrannosaur and other great reptilians typical of the Laurasia, that was at that time the great continent in the Northern hemisphere. They were gondwanic dinosaurs: predatory abelisaurs, herbivorous titanosaurs, southern iguanodontids, and many others (Figure 3.3).

Come to travel with us to this past world. Let’s track the footprints, understand the great diversity of dinosaurs and environments of this Lost World of Gondwana! (Figure 3.4).

Giuseppe Leonardi is an Associate Senior Researcher in the Department of Geology at Federal University of Rio de Janeiro and an Associate Curator of the Museo della Scienza-MUSE of Trento (Italy). He is the author of Annotated Atlas of South America Tetrapod Footprints and of Glossary and Manual of Tetrapod Footprint Palaeoichnology.

Ismar de Souza Carvalho is a Professor in the Department of Geology at Federal University of Rio de Janeiro and a Researcher in the Geosciences Center at University of Coimbra, the Brazilian National Research Council (CNPq), and Rio de Janeiro Scientist Program (FAPERJ).

Dinosaur Tracks from Brazil: A Lost World of Gondwana