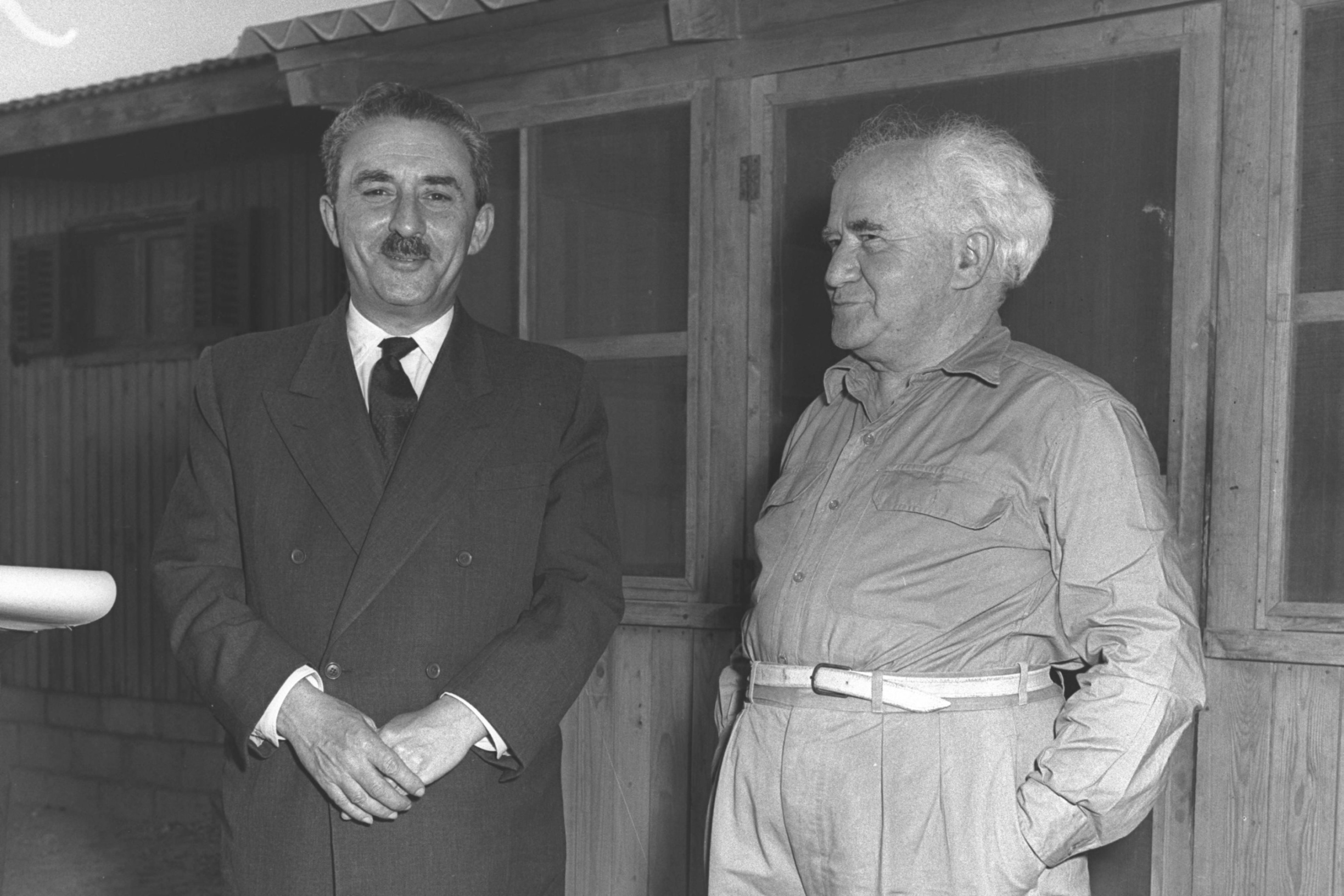 The following is a guest blog post written by Neil Caplan, co-editor along with Yaakov Sharett of the three-volume set My Struggle for Peace: The Diary of Moshe Sharett, 1953–1956. Header image photo credit: Israel’s Forgotten Prime Minister Finally Arrives in America via haaretz.com.

My interest in Moshe Sharett dates back to 1970, sparked by a magazine article that compared him to the better-known David Ben-Gurion, Israel’s first prime minister, giving illustrations about how the two men symbolized two contrasting approaches to foreign and defense policy. As Israel’s first foreign minister, Sharett prioritized diplomacy and moderation, whereas Ben-Gurion emphasized tough military responses to external threats to Israel’s security.

In the course of researching the Futile Diplomacy of Arab-Israeli peace efforts during the 1950s, I purchased Moshe Sharett’s Personal Diary (YOMAN ISHI) in Hebrew.

The set of 8 volumes, which soon went out of print, turned out to be one of my most precious Hebrew primary sources. Its appearance owed everything to the determination and hard work of Moshe’s son, Yaakov, a journalist and diplomat who transcribed and edited the diary, originally handwritten on 2375 tiny sheets of paper.

One of Israel’s best-known authors and historians, Tom Segev, had high praises for the diary and its editor:

… the most important thing Sharett contributed to the state is the personal diary he wrote during his tenure as prime minister. It is difficult to overstate the importance of those eight volumes to the study of the 1950s and to the understanding of Israeli history as a whole. This is a debt that Israel also owes to his son Yaakov, who saw to the publication of his father’s diary.

When I was first introduced to Yaakov Sharett in 1998, I asked him a question that dozens of other researchers had asked before me: Why hasn’t his father’s important personal diary been translated into English?

His answer was simple: a rough translation had already been prepared, but funding and a good English editor were needed in order to complete the job.

When Yaakov asked me if I would consider working on this project, I readily accepted, assuming the work would take 4-5 years to complete.

We began working together, polishing rough and poorly-translated English text that was transferred from very primitive word-processing files. As we went through the day-by-day entries, the project took on a life of its own.

Most of our work was done by daily email exchanges between Montreal and Tel Aviv, plus several working conferences that took me to visit Yaakov at the “Amuta” (Society for the Heritage of Moshe Sharett) offices in Tel Aviv.

The expected 4-5 years soon became ten, … then fifteen. Translating the Hebrew edition required not only meticulous review and many corrections, but also researching and writing up additional background notes specially designed for the English-speaking reader.

During the course of our work we also discovered unexpected new documentary material that amplified the existing daily diary: additional letters, memoranda, texts of speeches, etc. These required translation and consideration for inclusion. Should we cite the newly uncovered material in footnotes, leaving it to historians to pursue if they deemed important enough? Should we interweave all or some of the new text into the daily diary? Or should we include it in an online website that we decided to create for supplementary documents?

My familiarity with the history and the diplomatic documents of the period helped us with such decisions, expanding the Hebrew diary in some places even as we abridged it in others.

The Path to Publishing

In late 2015 we enlisted the services of Adi Chen, a talented Israeli graphic designer, to begin the careful process of transforming our MSWord files into camera-ready copy.

Finally, we began to approach publishers. In December 2015 we received a promising “yes, but …” reply from Indiana University Press announcing they were willing to consider publication of an abridged version of the diary.

We faced a major dilemma over this “but”. Despite the temptation to have a contract in hand from a prestigious university press, we decided to hold back and make our case for publishing the integral, fully-annotated diary, from October 1953 to December 1956.

We began our plea by reminding the acquisitions editor about Sharett’s historic significance as one of Israel’s three “founding fathers”, the other two being Chaim Weizmann and David Ben-Gurion. The legacy of these two men has been well preserved through many English-language publications, while Sharett remained virtually unknown outside of Israel. Our main purpose in creating this English edition was to help create a similar world-wide recognition for Sharett, a historic document that provided his uniquely detailed portrait of the life and times during a formative period of the young Israeli state.

Knowing that we were up against the economic realities of publishers’ extreme reluctance to take on multi-volume works, we were not optimistic. But, to our great joy and delight, Indiana accepted our proposal for publishing the complete diary—enabling Moshe Sharett and his insider’s account of Israel’s first decade to become better known around the globe.

In an important sense, we felt great satisfaction to be making Sharett and his moderate-diplomatic approach better appreciated outside of the narrower world of mainly Hebrew-speakers.

Neil Caplan is the author of many important works including My Struggle for Peace: The Diary of Moshe Sharett, 1953–1956, The Israel-Palestine Conflict: Contested Histories and of Futile Diplomacy, a 4-volume documentary history of Arab-Israeli negotiations. He is also the co-author (with Laura Zittrain Eisenberg) of Negotiating Arab-Israeli Peace: Patterns, Problems, Possibilities, also published by Indiana University Press.