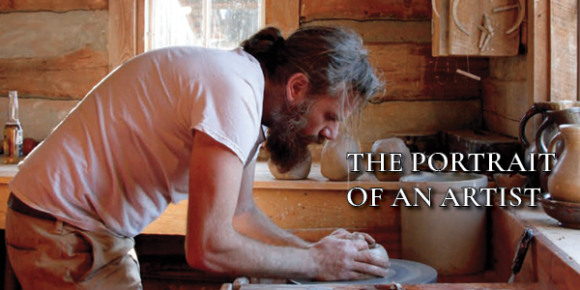 Henry Glassie has been publishing with IU Press since the 1970s, making him the longest active IU Press author. This highly anticipated work, Daniel Johnston: A Portrait of the Artist as a Potter in North Carolina, is the highlight of a lifelong career in humanistic scholarship and now available wherever books are sold.

Daniel Johnston, the subject of the book, was raised on a farm in Randolph County, North Carolina. When he returned from Thailand with a new way to make monumental pots, he also built a log shop and a giant kiln for wood-firing. He set out to create beautiful pots, grand in scale, graceful in form, and burned bright in a blend of ash and salt. With mastery achieved and apprentices to teach, Daniel Johnston turned his brain to larger installations. Among other projects, he built an open-air installation on the grounds around the North Carolina Museum of Art, where 178 handmade, wood-fired columns march across a slope in a straight line, 350 feet in length, that dips and lifts with the earth while the tops of the pots maintain a level horizon.

In 2000, when he was still Mark Hewitt’s apprentice, Daniel Johnston met Henry Glassie, College Professor Emeritus at Indiana University, who has done fieldwork on ceramic traditions on five different continents. Over the years, during a steady stream of intimate interviews, Glassie gathered the understanding that enabled him to compose this portrait of Daniel Johnston, a young artist who makes great pots in the eastern Piedmont region of North Carolina.

Glassie is a world-renowned folklorist, known for publishing widely in the fields of material culture and vernacular architecture. He has written twenty books and received numerous awards for
his work, including the Haney Prize in the Social Sciences and the Life Achievement Award of the American Folklore Society. Glassie’s inspiring career has not gone unnoticed — a documentary on his fieldwork, Henry Glassie: Field Work, made its debut last September at the Toronto Film Festival. The film will be shown at the IU Cinema in April, with Glassie and his wife, Professor Pravina Shukla, scheduled to make an appearance.

Want to learn more? Grab your copy of Daniel Johnston: A Portrait of the Artist as a Potter in North Carolina today!