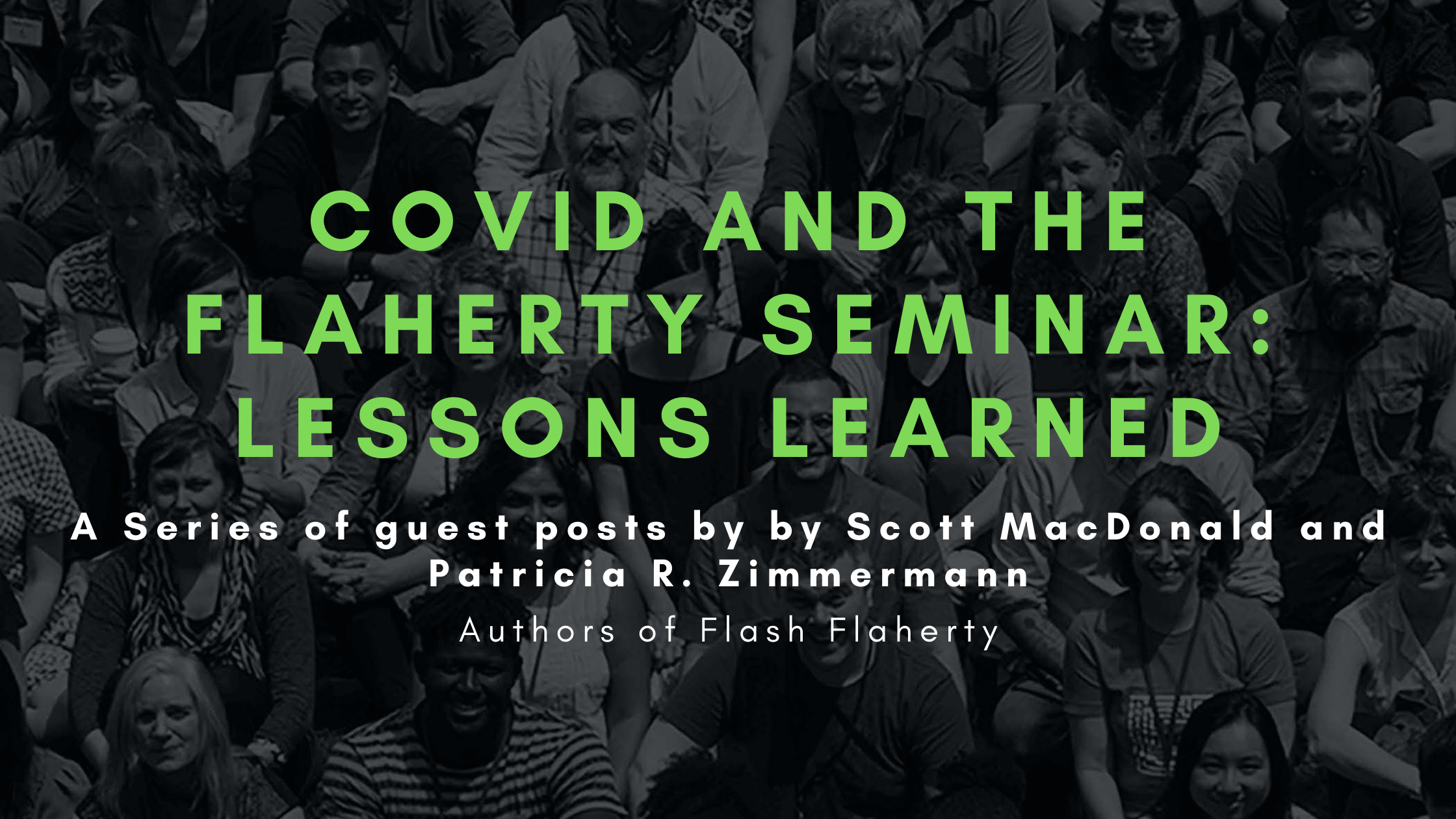 The following is a part of a series of guest posts by Scott MacDonald and Patricia R. Zimmermann, authors of Flash Flaherty: Tales from a Film Seminar.

The COVID 19 global pandemic has ignited one of the greatest disruptions to film industries and organizations in history.

The entire media ecology from the big media transnationals to independent art houses to centers of artisanal filmmaking have been affected.

Even the Flaherty Film Seminar has been disrupted for the first time in 66 years.

However, as is evident in our two books, The Flaherty: Decades in the Cause of Independent Cinema and Flash Flaherty: Tales from a Film Seminar, the Flaherty is a survivor.

The seminar has weathered anti-Communist witch hunts and decades of limited interest in experimental/documentary films. It has stuck it out through political upheavals about the war in Vietnam, race, gender, and colonialization. It has lived through endless changes in technology from 35 mm to 16 mm to video to new media. It has survived despite limited staff and resources.

We believe the Flaherty will rise from the ashes of our COVID moment because of lessons learned from its longevity:

For the Flaherty, this has meant adhering to Frances Flaherty’s concept of nonpreconception. At the seminar films are presented without context or fanfare.

In a time of COVID, nonpreconception can mean that, like Robert Flaherty’s films, which were the instigation for the seminar, the organization will discover ways to carry on and will continue to offer powerful experiences.

The people who attend the Flaherty are as important as the invited filmmakers and their films.

The seminar is about the kinds of engagement and community and comradeship that you often can’t get elsewhere.

Give people committed to the possibilities of cinema a vibrant community—and they will give you loyalty.

Sure, there are eminence grise at the Flaherty. But the best of them are big-hearted with those coming into the field and generous about sharing their ideas, their work, and their experience.

At the seminar, everyone is “in it” together.

The predictability of mainstream commercial media tends to anaesthetize. We are amused but our passions are repressed.

Let people know they can love a work or hate it or love and hate it. The Flaherty Seminar depends on passionate combustions.

As George Stoney and Erik Barnouw, longtime advocates and participants in the Flaherty, used to say, “without conflict, there is no possibility for change.”

Stop being a partisan and know the expanded world of creative media.

Destroy all borders to unleash heterogeneity in programming so that documentary, experimental, narrative, installation, new media, performance, archival films, and both established and emerging makers, can coexist.

Sometimes it floundered as machines crashed and projects could not be seen properly, but it always moved ahead with good humor.

The Flaherty has always designed seminars respecting the resources available.

Frances Flaherty started the seminar in 1955 with nothing but her Vermont farm and its barn, a projector, prints of Robert’s films, and some friends. And not a single grant or all-access pass.

In a crisis of global proportions, small can be better than big.

The Flaherty has always been much smaller than any established international film festival.

And this has meant that it could be more flexible in developing scalable and sustainable strategies to keep going.

In recent decades, it encouraged more full-paying film professors to attend. It found organizations excited to host the seminar, such as Colgate University.

Most importantly, it created an environment where everyone from graduate students to eminent scholars and filmmakers can feel part of something larger than themselves, as they invent new media worlds together.