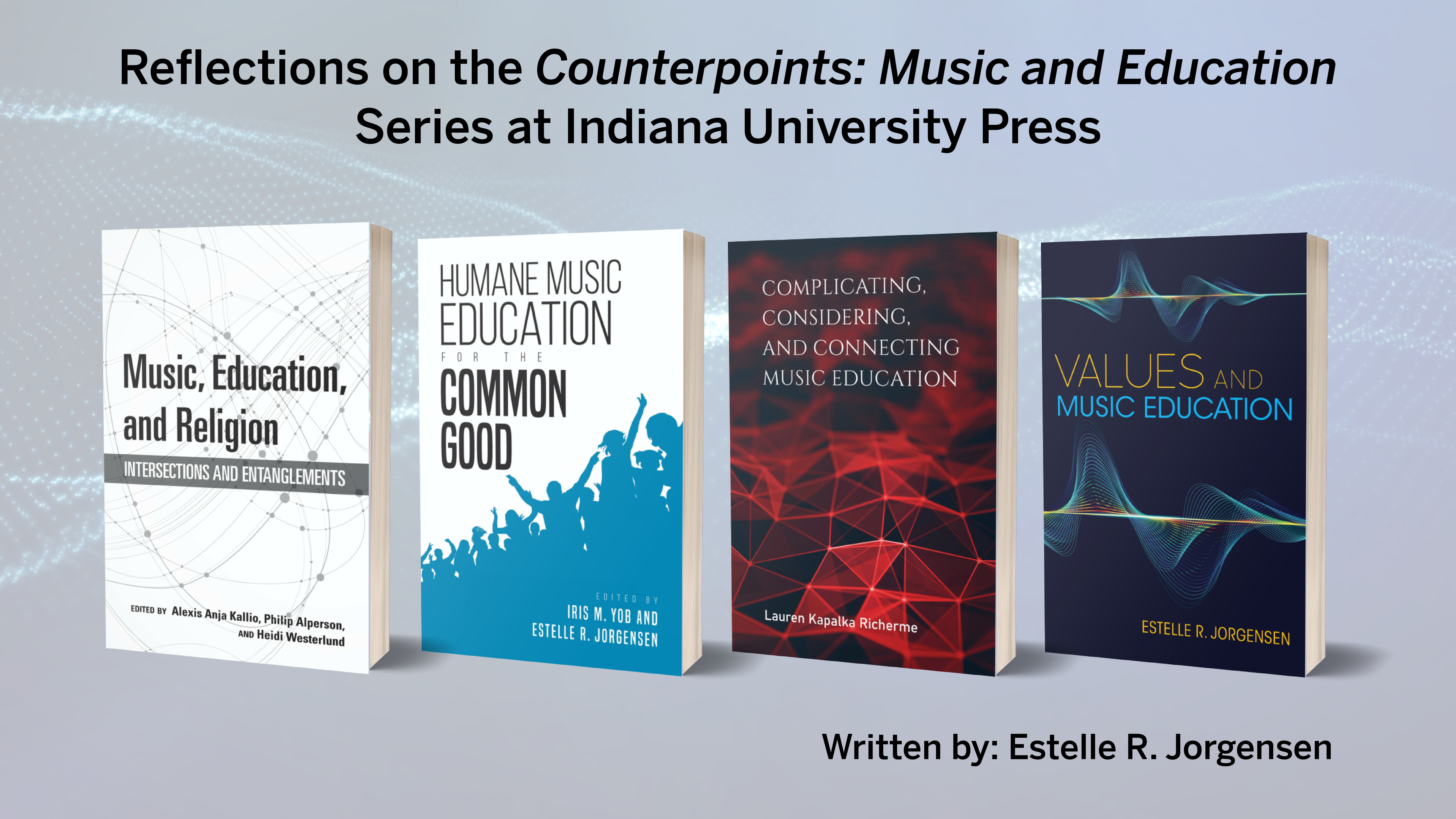 At the beginning of the 21st century, Indiana University Press committed to the publication of the Counterpoints: Music and Education series dedicated to the publication of texts that offer timeless and groundbreaking philosophical, conceptual, foundational, and international contributions to music education. The Press’s long-standing reputation for the excellence of its music list and book series and its association with the Indiana University Jacobs School of Music, one of the world’s leading centers of musical education, provided the basis for its commitment to this series. My Transforming Music Education, published in 2003, led off the series. The series title, Counterpoints: Music and Education, encapsulates a focus on multiple perspectives at the intersection of music and education, broadly construed. Its purpose is to reflect on, challenge, reconceptualize, and offer fresh and broad perspectives on music educational theory and practice and to address subjects different from the method-oriented music curriculum and instruction texts common in the field. As a scholarly series, its titles are written for an audience of teachers, musicians, students, and readers interested in aspects of music education. Titles have been well received and are regularly used as texts in philosophy and other foundational courses in music education in the United States and abroad. Some have become classics in the field. Meticulously reviewed, attractively produced, and modestly priced, they continue to fill a need in music education for a select group of publications in which the dissemination of exemplary scholarship is the overriding objective and where differing and conflicting perspectives are welcomed.

The past two decades represented a sea change in academic publication and as series editor, I have had a ringside seat to this transformation. From the world of traditional books and marketing methods has sprung a world of digital publication that challenged the economic foundations on which academic publishing had been built in the past. This change required rethinking the ways in which publications could be prepared and advertised and from which income streams could be generated to ensure viability. Confronted by these new realities, IU Press was among the forefront of academic publishers in thinking digitally about publication and marketing. Early on, electronic texts were released simultaneously with paper versions to take advantage of developing technologies. Rather than predatory pricing, titles were priced affordably. As a result, Counterpoints series titles remain in print long after publication—a fact appreciated by authors, teachers and their students, and wider audiences. Throughout this upheaval in academic publication, the Press took a long view committed to its various series of which Counterpoints was one while streamlining its operations and adjusting to a transformed publication landscape.

Having published three books with another forthcoming from Indiana University Press, I have been able to write the books I wanted to write and see them published. This is as it has been for other Counterpoints authors and editors. Working with various titles, I have witnessed professionalism and excellence from beginning to end of the review and publication process. Reviewers have provided critiques that have been genuinely helpful and demonstrated both generosity and deep understanding of the content in question. In every case, their critiques offered ways to improve the resulting product. A cross-disciplinary editorial review policy before publication now offers ways to broaden audiences and critical perspectives beyond the interests of a book’s specific field. Book covers have taken advantage of authors’ preferences when desired and I have not been disappointed in my choice to leave all artistic decisions concerning my book covers to the artists at the Press. Rather than a multitude of titles in Counterpoints, the Press has selectively published a modest stream of single-authored titles and a few edited titles. This approach has assured that each project receives the personalized care and attention it deserves.

A series editorship is a precious responsibility and an opportunity to cultivate and publish cutting edge scholarship in one’s field. It has been an honor to have served as the founding series editor of Counterpoints and to have worked over the years with outstanding authors and editors. Collaborating with a succession of acquisition editors at the Press requires flexibility, good will, respect, and trust in one’s colleagues. I am fortunate to have worked with music acquisitions editors who have brought unique perspectives to the series and shepherded important projects through the review and publication process. A series editor wears twin hats: on one hand, one searches out projects that exemplify important contributions to scholarship; on the other, one keeps an eye out for those projects that will likely attract readers and thereby ensure the financial viability of the series. The rewards of maintaining a series over the long term are evident in generating a consistent and continuing stream of scholarship that informs, shapes, critiques, and enriches a field. As a series editor, I think of my role not only as visionary in imagining those subjects that require attention in my field but also more humbly, as caretaker until it is time to bequeath this responsibility to another who can breathe new life into it and take it to greater heights.

I am thankful that Randall Everett Allsup has accepted to edit the Counterpoints series. Randall is known to music educators internationally as one of the profession’s foremost philosophers, and the author of Remixing the Classroom: Toward an Open Philosophy of Music Education, published in this series. I am sure that philosophers and the wider community of music education researchers will want to join me in wishing him well in this important endeavor.