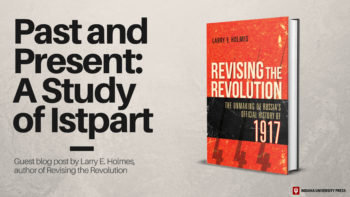 Two IUP authors to appear at Politics and Prose this weekend

Politics and Prose will host two events with IUP authors this Saturday and Sunday at its bookstore in Washington, D.C.

We are pleased to announce that three of our books have been named Choice Outstanding Academic Titles of 2013! Selected by Choice's subject editors, this prestigious list of publications reflects the best in scholarly titles…. READ MORE

Congratulations to Karen Petrone, who received the Heldt Prize for her book The Great War in Russian Memory! Awarded by the Association for Women in Slavic Studies,… READ MORE

Karen Auerbach, author of The House at Ujazdowskie 16, will present a book talk October 1 at 7 p.m. at the … READ MORE

As part of the School of Global and International Studies (SGIS) Global Speaker series, IUP author Eric Weitz will give a presentation on "Borderlands and Bloodlands: Rethinking the Mass Violence of the Twentieth Century in Eastern Europe."… READ MORE

Listen to Loren Graham read from his book Moscow Stories

In Moscow Stories, author Loren Graham recounts stories of the rich cast of characters he encountered during his time as a graduate student at Moscow State University in the early 1960s…. READ MORE

Book review: The House at Ujazdowskie 16

"This is an interesting and often moving tableau about the efforts of some wounded people to overcome their personal tragedies while redefining their communal loyalties." —Booklist