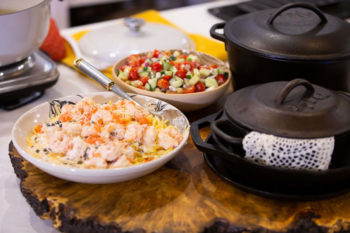 Not Your Mama’s Cast-Iron Recipes

Cast-iron cooking has made a comeback with these easy and delicious recipes from Modern Cast Iron by Ashley L. Jones! With the help of Jones, both new and returning cooks will be able to rival even grandma’s cooking. Keep reading to discover exciting desserts such as a skillet cookie and a Peach Dutch Baby, layered nachos, and even the perfect eggplant parmesan recipe!

Win a Copy of ‘The State of Bourbon’

Celebrate National Bourbon Heritage Month and enter to win a copy of ‘The State of Bourbon’. Bluegrass natives Cameron M. Ludwick and Blair Thomas Hess make planning a breeze by showcasing the region’s finest distilleries as well as the local restaurants, hotels, parks, and adventures that every bourbon lover needs to experience,

Patrick Brantlinger will teach a class based upon his book States of Emergency: Essays on Culture and Politics. … READ MORE

Bloomington may not be the biggest city in Indiana, but it offers an abundance of culinary delights that rivals any major metropolis. One local favorite is FARMbloomington,… READ MORE

Helen Szamuely wrote an article for History Today about Yelena Molokhovets, the Russian housewive who wrote guides for running a household and cooking in the 19th century…. READ MORE

Daniel Orr and his family have been named winners of the 2012 Arnold Award for Rural Preservation from Indiana Landmarks and Indiana Farm Bureau for Kolb Homestead,… READ MORE

We are pleased to announce that Keystone Korner won a 2011 ForeWord Book of the Year Award! The book received a Gold in the category of Performing Arts…. READ MORE