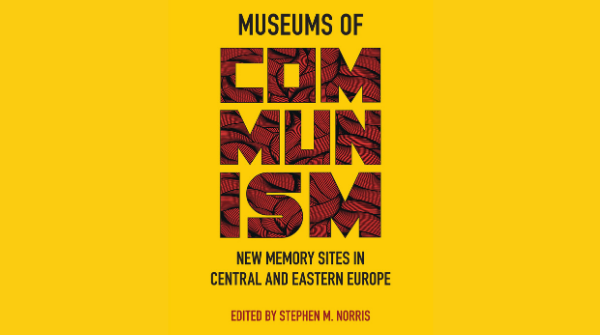 The following is a guest blog post by Stephen M. Norris, author of Museums of Communism: New Memory Sites in Central and Eastern Europe.

In May 2018, I visited two Museums in Bulgaria that aimed in their own ways to curate the communist era. One visit was planned, the other completely unexpected. Taken together, the Museum of Socialist Art and the Retromuseum “Billy” capture two representative approaches to remembering communism in Central and Eastern Europe.

Like most countries across the former Soviet bloc, Bulgaria witnessed a period of iconoclasm after the 1989 Revolution that saw Teodor Zhivkov resign. Statues to Lenin and Georgi Dimitrov came down (the latter had his mausoleum destroyed in 1999); so too did other visible reminders of the communist dictatorship. Communist officials had ordered many pre-existing monuments to be torn down in order to sweep away the old and bring in the new. After 1989, most of the monuments they had built subsequently landed on the dustbins of history. The journalist Dimiter Kenarov has summarized the widespread view of the time: “if Bulgaria was to choose a free and democratic path, it had to first remove the offensive idols of the past watching in impunity from their pedestals.”

Like most other countries across the former Soviet bloc, a giant statue of Lenin loomed over one of Sofia’s central squares, staring purposefully at the buildings housing the Bulgarian Communist government. Lenin came down after November 1989, replaced by a statue to Saint Sofia. The discarded Lenins and discarded Dmitrovs sat in alleys, in warehouses, in garbage-strewn courtyards. Stripped of their aura, they no longer watched anything with impunity. Instead, they gathered dust and began to erode.

Like most other countries across the former Soviet bloc, many Bulgarians began to reappraise the recent past. Some felt nostalgic for certain elements of the socialist era. While few if anyone clamored for Lenin to return to his pedestal, some did want him out of the trash heap and displayed in some acceptable fashion. Still others wanted him to remain buried once and for all.

Like most other countries across the former Soviet bloc, the post-communist Bulgarian state decided to establish a museum in the recent past. In fact, many called for Bulgaria to “catch up” to its neighbors by establishing such a memory site. The Museum of Socialist Art opened in 2011 and gave the discarded monuments a place to stand once more. The Lenin who had loomed over one of Sofia’s square could now stare out across a nice courtyard and see fellow comrades. “We are closing one page of the Bulgarian history and communism is going where it belongs — in the museum,” then-Finance Minister Simeon Djankov declared at the opening.

Like most other countries across the former Soviet bloc, the new museum provoked vociferous debate. Detractors railed that by putting communist-era statues back up, the Museum threatened to rehabilitate the old system and “eternalize its ideology.” Other critics argued that the returned statues clearly did not speak enough to the repressive elements of the Bulgarian communist system. And still, others declared that at least something official now tried to wrestle with the past. Many had long noted the need for some state institution to address the communist period: the writer Georgi Gospodinov even published an article in 2005 entitled “The Missing Museum [Lipsvashtiyat muzey].”

A decade after opening, the Museum of Socialist Art testifies to the ambiguous, sometimes fractious relationship Bulgarians have to the communist era. While its gift shop and café contain a fair bit of kitsch, the main attractions—the 75 statues that stand in its outdoor courtyard—have not brought back an eternal communist state. Instead, they allow visitors to do what they want: you can bow before Lenin if you want or give him the finger. The Sofia museum resembles Budapest’s Memento Park, whose architect lent that site its motto: “This Park is about dictatorship. And at the same time, because it can be talked about, described and built up, this Park is about democracy. After all, only democracy can provide an opportunity to think freely about dictatorship. Or about democracy, come to that! Or about anything!”

I can’t say that I thought about democracy or restoring dictatorships when I visited in May 2018. I didn’t flip him off or bow before him. Instead, I strolled through the courtyard, viewed the fascinating art exhibit inside the museum proper, and browsed the gift shop. I also learned quite a bit about who had been memorialized during the communist era in Bulgaria and in what fashion (lots of Lenins and Dimitrovs, to be sure, but also Che Guevara, heroic partisans, and women factory workers).

The day before my visit to the Museum of Socialist Art, my colleagues and I stumbled upon a roadside “museum.” There I got to see a bust of Stalin peering out from the trunk of an old taxi, the head of Dimitrov without a nose, Stalin’s head on a Temp TV set, and much, much more: tea sets, signs, refrigerators, posters, bicycles, store display cases (still empty), radios, typewriters, accordions, public telephones, cars. Billed as a “retro showroom” of “antiques,” but more popularly called Retromuseum “Billy,” the site allows visitors to browse through the ephemera of the communist past. My colleague leading the excursion would never be accused of someone nostalgic for the communist era, but when he saw the make and model of his family’s old refrigerator and the same type of television he watched World Cup matches on as a child, he could not help but smile and reconnect to his personal past. In doing so, was he eternalizing its ideology, as critics of these types of museums of the everyday allege? I doubt it.

The Museum of Socialist Art illustrates the challenges the post-communist Bulgarian government has faced (and continues to face) when trying to confront the communist past. These challenges have produced a number of different museums that seek to remember communism, with some governments establishing sites that stress the oppressive elements of the recent past and others adopting a form more like the Bulgarian example. Across the former Soviet world, governments have similarly struggled to balance the perceived need to remember communism with the competing ideas of how best to do so. The Museum of Socialist Art is unusual in that its creators understood the challenges others had faced before them in other countries and therefore decided to leave the statues in a deliberately ambiguous state.

The Retro Museum, like other unofficial museums, attempts to preserve everyday objects from the communist era. Its owner and curator, Valentin “Billy” Balabanov, started collecting communist-era material objects 25 years ago in order to prevent them from vanishing altogether. His collection has now grown immeasurably. When I visited, Billy told us that “history should be about objects, not just ideology.” His museum, he concluded, “is a place that shows history as it was.”

To see how other museums have dealt with the communist era, check out the essays in my edited volume, Museums of Communism. There you can read about fourteen museums that have appeared (or been renovated) since 1991.