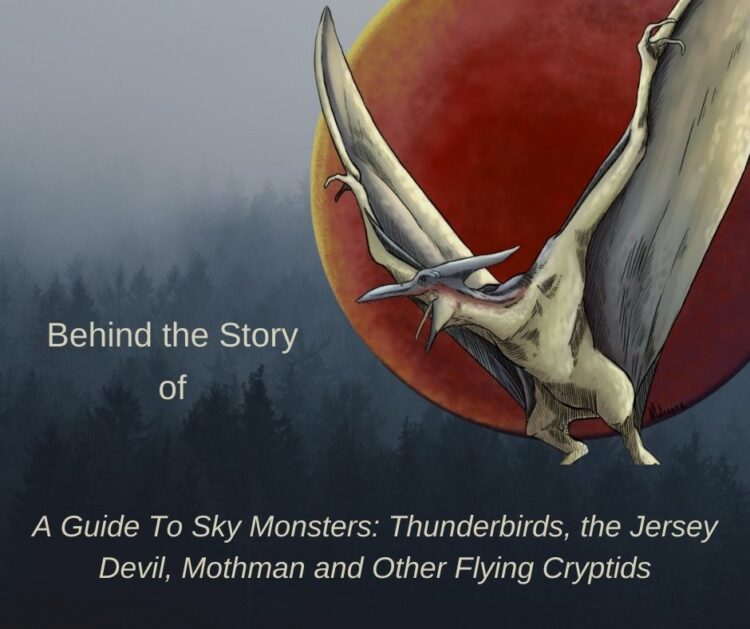 The following is a guest blog post written by T. S. Mart, co-author of A Guide to Sky Monsters.

Maybe it’s the writer in me . . . or the social worker, but I have always been intrigued by human behavior. Even as a young child, I analyzed family, friends, and even strangers, trying to figure out how some people were successful and others not so much. I knew if I could avoid the mistakes they made, my life would be perfect.

The problem with my theory was no matter how I prepared, I had no clue how I would react to change until I was ankle-deep in it. No two people react the same because life variables train us to look at the world through slightly different lenses. The most important variable is our belief system (not believing in something is also a belief system). Our belief system figures into every facet of our life.

What does this have to do with Sky Monsters—those cryptids that fly? More than you might realize. More than I realized. Cryptids that rise out of the sentiments of the times often have deep historical or cultural roots. This couldn’t be more true for the Thunderbird, Jersey Devil, and Mothman.

Not only were belief systems at play during the rise of these cryptids but so were the nasty seeds of intolerance and distrust. What we believe + high emotion = volatile reactions. Unchecked, this combination becomes a breeding ground for hate—even in the world of cryptids. But why? We’re talking about unknown animals or creatures. These were my thoughts as I read through many books, articles, and websites. Behind each of the main players in our book—the Thunderbird, Jersey Devil, and Mothman—existed a message, one as relevant today as it was then. This book is our attempt to share their origin stories and the message behind them.

Conversely, for every serious side of a cryptid there is also a fun and fantastical side. Mel—the heart and soul behind our cryptid projects—brings the fun. She has profiled over thirty-five unknown flying cryptids and illustrated many of them. Without her talent and imagination, this book wouldn’t have been possible. Because of our blending talents, this book may be different from other cryptid books, but we hope it offers a comprehensive look at the world of flying cryptids. Thank you for reading.

T. S. Mart enjoys writing true-to-life stories and showcasing ordinary people in extraordinary circumstances. With a background in social work, she makes her home in a small Midwestern town, where she writes to inspire and entertain. T. S. Mart is also the owner of Cryptid World, where she offers family-friendly content on cryptids, creatures, and fascinating creations.

After graduating high school in 2014, Mel fine-tuned her passion for designing creatures, cryptids, and monsters by closely studying the world around her and teaching herself the basics of animal and human anatomy. Constant inspiration by the uniqueness found in nature keeps Mel’s imagination alive. Mel is the owner of Mel Cabre Creature Designs. Most days you can find her working on the next issue of the Creature Look Book. You can find her on Instagram at mel.calbre.