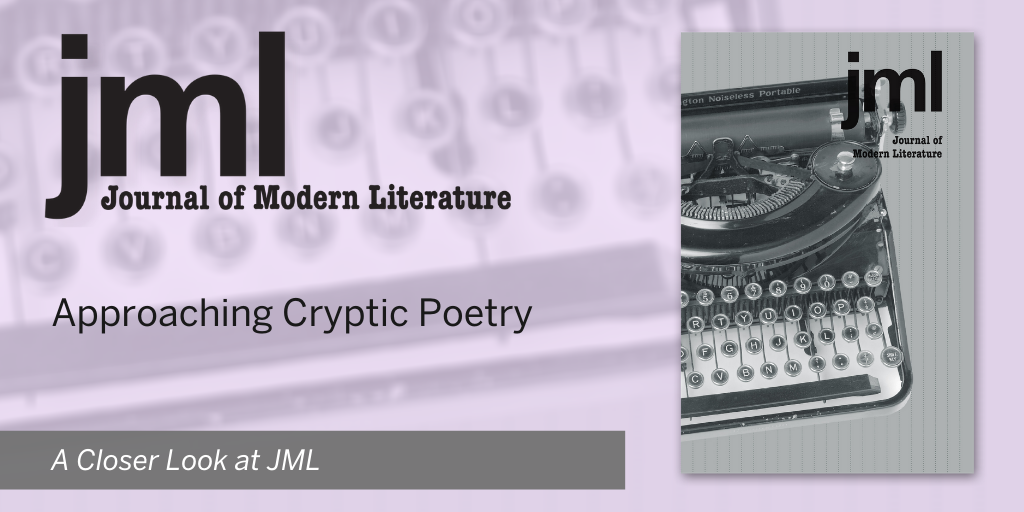 By Jerome J.H. Lim, author of “Recurrence and Remembrance: Reading J.H. Prynne’s ‘Reach Up’ and ‘Morning’ from Al–Dente,” in the Journal of Modern Literature (43.4 Summer 2020) now available on JSTOR .

As a third-year undergraduate frantically searching for interesting poets to write about to meet an essay deadline, I first came across the work of J. H. Prynne via his Poetry Foundation page. I was struck by the featured lyrical extract from Into the Day (1972), and out of curiosity I ventured onto the Face Press webpage to purchase his then-latest collection, Al–Dente (2014). When I received the tiny red pamphlet, I was rather taken aback as I read the monosyllabic sequence that began “Morning”: “To the or so then for all for on …”. I distinctly remember saying to myself “This isn’t poetry.”

While I have since come around to accepting that the pieces in Al–Dente are poems, I still believe reading Prynne’s poetry can be rather like untying a stubborn knot. Prynne has been amazingly productive in his twilight years—he has published five collections in 2020 alone—but the general tenor of his poems remains. They are a complex philological knitwork of references. For example, the new annotated version of The Oval Window (2018) incorporates “extracts from literature, Eastern and Western philosophy, optics, anatomy, computer programming language, and a considerable quantity of ancient Chinese poetry alongside photographs and newspaper cuttings” (cover 4). Even back in 1964, in a BBC radio interview given at the start of his poetic career, Prynne remarks that if “a reader isn’t at present prepared” to engage his poetry, then he is “prepared to wait” (Poet Speaks). Over fifty years on, there are quite a few committed scholars of Prynne who are certainly prepared, producing discussions of Prynne’s poems containing a formidable preponderance of research on its possible sources. This is the general form my JML article takes: I trace possible references in Prynne’s “Reach Up” and “Morning” (from Al–Dente [2014]) to Wordsworth and the iPhone application Pulse Track, among others.

But is treating the reading of Prynne’s poems as merely an archaeological dig for potential sources the best way to go about it? Does it perhaps reduce Prynne’s project to, as Robert Rowland Smith puts it in his book on modern poetry, a “giant crossword puzzle for clever, earnest men” (160). This mode of reading works from a certain kind of faith─faith that the effort put into tracing the text’s various loops and references might lead to some sort of insight or contingent meaning. Yet amongst his critics (including myself) there seem to be a habit of critical diffidence: a reluctance to commit one’s reading to an overall orchestration of meaning in the text. Take the astute critic Michael Tencer’s  introduction to his reading of Prynne’s Pearls that Were (1999): “I’d like to begin with an outrageous contention, and then I will attempt to throw some evidence at it, for good measure. My contention is that Pearls That Were is about something, and that something is quite specific, and it will not flatter just any reading we might find in it─only mine” (156, emphasis his).

Perhaps one can extend such tendencies of reluctance to the interpretation of any cryptic poem. But only within the realm of Prynne scholarship does the contention that a particular poem is “about something” become “outrageous.” Certainly, this claim is not made flippantly. It is a claim made by recognizing the earned, intentional abstraction of Prynne’s long-running neo-modernist project and its poetic implications.

However, such critical diffidence also runs the risk of portraying Prynne’s work as merely an assemblage of words put together for the pleasure of source-hunting scholars. While I think diffidence is necessary in readings of Prynne, I wonder if there is some sort of ground in which we can test our intuitions about the poem against, because I am aware that each source is purposely and not randomly seeded by Prynne as a node of circumscribed possibilities. That is, how do we know if some guesses might hold more water than others? My supervisor at Cambridge, Drew Milne, wrote an article almost two decades ago about making “speculative assertions” about Prynne’s poetry (67). In it, he posits that we can perhaps make meaningful claims about Prynne’s poetry if we “articulate the limits of this poetry’s resistance” and delimit “the way readings speculatively project beyond such limits” (Milne 86).

Perhaps this is food for thought for future research on Prynne. In the earlier-mentioned radio interview, Prynne, when asked about the selectiveness of his poetic vocabulary, explains that his poems “circle around an area” which lie “close to what I consider to matter to be important, about my general predicament” (Poet Speaks).  Such individual concerns perhaps speculatively emerge in Prynne’s poems such as “Morning” when read through the lens of Wordsworthian transcendentalism. Individual acts of feeling and remembrance are transformed into poetic memory, projecting the single-minded likeness of the past into a speculative dimension, which resists the reader and yet challenges us to navigate its contradictions through our own careful readings.

—
Jerome J.H. Lim (jerome.lim.jit.how at gmail.com) is a postgraduate candidate at the National Institute of Education, Singapore. He graduated with an MPhil in modern & contemporary literature (distinction) from Gonville & Caius College, University of Cambridge. He is the managing editor of the Singaporean archive, poetry.sg, and the recipient of the Ursula Wadey Memorial Prize.