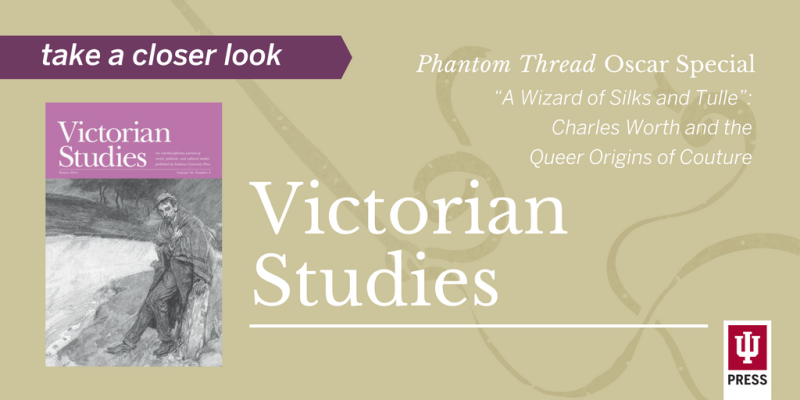 In celebration of the Oscar-nominated film, Phantom Thread, revisit Abigail Joseph’s article, “’A Wizard of Silks and Tulle’: Charles Worth and the Queer Origins of Couture,” from the Victorian Studies’ archives, available on JSTOR & Project Muse. Below, Abigail elaborates on the similarities between 19th century Parisian fashion designer, Charles Worth, and the fictional Reynolds Woodcock.

Towards the beginning of Paul Thomas Anderson’s movie Phantom Thread — perhaps after we had seen the eccentric couture designer Reynolds Woodcock throw one of his breakfast fits, claiming that particularly runny pastries or the sound of toast being buttered were enough to disrupt his focus for the entire day — my movie-going companion leaned over and whispered, “Was he based on Charles Worth?” The answer is no — Worth, though also British, lived and worked in 19th century Paris rather than 20th century London — but the question makes a lot of sense. The subject of my 2014 article “A Wizard of Silks and Tulle,” Worth is often credited with essentially inventing the system of haute couture fashion production; in addition to innovations like seasonal collections shown by models, he was one of the first fashion designers to become a celebrity in his own right, his lavishly expensive designs sought after by wealthy clients all over the world not only for their beauty and luxury but also for the allure of the House of Worth name. He was also one of the first men (since the 17th century) to break into the world of women’s fashion design, causing something of a scandal. He was referred to as a “man-milliner” in the English press, where well-known authors including Charles Dickens published satirical pieces questioning the propriety of this gender-role transgression as well as mocking Worth’s well-established (and, it seems, justified) reputation for arrogance, obsessiveness and fussy, bizarre habits — all qualities amply displayed by Reynolds Woodcock in Anderson’s film.

My article takes up a collection of anecdotes about Worth and his atelier from both suspicious (mostly male) journalists and from his clients, women who depict the same difficult, sometimes infuriating character, but show a great deal of patience, affection, and even love for him. One of the things that especially irritates the journalists is the adoration of the clients, their willingness to put up with his condescending and often rude behavior. Those clients, however, like some of Woodcock’s, tend to see themselves as comrades and collaborators, not merely mannequins, though at the same time they clearly enjoy the peculiar pleasures of being “worked on” by a demanding, autocratic man whose interest in the shapes of their bodies is very intense but decidedly non-sexual. Unraveling some of the complexities of that dynamic, I make the argument that Charles Worth embodied a kind of queer masculinity based in unconventional cross-gender relationships with women and feminine objects. He also, I think, initiated the idea of the couturier as a queer man, which is now so common that it is seen as a stereotype, but is more than that: in fact, although there is no evidence that Worth himself was homosexual (he was married and had two sons, though very little else is known about his personal life), the vast majority of high-fashion designers who followed in his steps throughout the 20th century and into the present have been gay men.

Reynolds Woodcock is not a gay man. Though it partakes of tropes and semi-coded language affiliated in 19th and 20th century literature with closeted homosexuality — he is a “confirmed bachelor”; women are continually frustrated by their inability to hold his romantic “attention”; scenes of dress-fittings take the place of sex scenes — Anderson’s script does not suggest even for a moment that his erotic interest might turn towards men.  At least one critic has taken issue with this, claiming that portraying Woodcock as heterosexual erases gay men from their own history. Indeed, it’s a fair point: almost all of the designers who Anderson and his collaborators have cited as inspirations for Woodcock’s character — Charles James, Cristobal Balenciaga, Christian Dior, Norman Hartnell — were gay, and as I and other scholars have argued (see, for example, the catalogue for the FIT Museum’s 2013 exhibit “A Queer History of Fashion,” edited by Valerie Steele), the queer contribution to fashion is an extraordinarily rich and very often overlooked or dismissed arena of cultural and aesthetic history.  A different Phantom Thread might have shown this; a Woodcock who becomes entranced by a young waiter named Albert rather than a waitress named Alma, who then tries to make a place for himself in to the rarefied, sanctified, troubled world of the London townhouse that is both couture house and haunted home. That film — or, perhaps, one that will be made in the future — might movingly portray the way that both closeted and open homosexualities seem somehow to have acted as catalysts for reimagining the ways that clothes might look.

But that is not the movie that Anderson made: instead, we have a love story between a man and a woman, but one that is — like Charles Worth — abundantly queer, if we take the term in the expansive theoretical sense that incorporates not just same-sex desires (and identities) but those that defy or exceed norms and conventions of all kinds. And comparing the two men lets us put the fictional Woodcock into a historic lineage of queer artists that begins with Worth in the mid-19th century. Woodcock’s strange, even bad, behaviors then become part of a cultural tapestry, in which the eccentricities and outsized personalities of designers (which often, though not always, have resisted various expectations of masculinity and femininity) take on meaning as threads, so to speak, in the art of fashion. Conversely, the film, as fiction, can take us places that historical records almost never do; it imagines for its central character an erotic life and psychological depths that illuminate, with detail both shocking and tender, the links between desire and design, between the body and its supplements.

In my article, I describe the relationships between Worth and his clients/muses as “controlling but also collaborative,” exasperating but weirdly tender, colored by a “variety of love that does not preclude prickly strains of rivalry, coercion, criticism, demand, and aggression.”  But the film goes a lot further than this. Twisting in wildly unexpected directions in its latter half — please note that spoilers follow! — it shows us the unbelievably kinky erotic textures of the relationship between a designer and a muse, or rather a woman who begins as muse and then becomes many other things.  A partial list: mistress, employee, collaborator, adversary, victim, caretaker, wife, surrogate mother, tormentor, dominatrix, and finally, it seems, soulmate. One way to think about the film would be a kind of narrative of the revenge of the muse: Reynolds Woodcock treats Alma quite wretchedly much of the time, demanding that she be subservient, physically and emotionally, to the vagaries of his needs. When we discover her using a carefully measured dose of poisonous mushrooms to make him sick and weak enough that he becomes utterly dependent on her, it seems that she has upended the power balance in their relationship, and in such a way that her monstrosity suddenly and vastly outdoes his. But the film does not end there. In the very last act, the final surprise is that he likes it: he becomes a willing participant in this dangerous play with vulnerability and strength, illness and recovery.

Some critics suggest that where things end up means that the film was never really about fashion in the first place, but I don’t think that’s right. Poisoning, which Oscar Wilde called a “subtle and secret” art, comparing it (archly) to both writing and drawing, is also the double of fashioning. Both practice the intricate, minutely calibrated manipulation of the body: Reynolds boasts, during their first dress fitting, that his skillfully constructed dresses will give Alma breasts, “if I choose to”; Alma in turn tells him, as he eats the first bites of her skillfully poisoned omelet, that he will not die, but may wish that he would. She will give him symptoms when and how she chooses to. Now each can break down and rebuild the other. Reynolds, in addition to finding erotic satisfaction in yielding to her perverse caretaking, also seems to admire Alma’s mastery of an art that perversely mirrors his own. Is the lesson, then, that fashion is deadly, or poisoning beautiful? The film does ask us to pursue these darker meditations. But it also gives entrancing life to an idea that I try to point towards in my article: that of high fashion as a queer place; one where the most inventive visions of human beauty can be materialized, and the strangest people can — whether in the brief moment of a fitting or the long one of a romance — find themselves reflected and remade in one another’s singular gaze.

Abigail Joseph is a Language Lecturer at New York University, and holds a PhD in English from Columbia University. Her writing on fashion history has appeared in Victorian Studies, Public Books, and the edited collection Crossings in Text and Textile. She is currently working on a book about the relationship between gay identity and material culture in nineteenth-century England.

More from the Victorian Studies 56.2 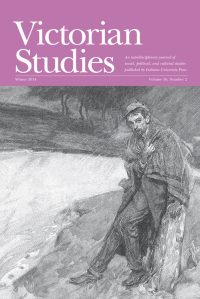 “The True Meaning of the Word Restoration”: Architecture and Obsolescence in Jude the Obscure
Benjamin Cannon

• READ FOR FREE •
“A Wizard of Silks and Tulle”: Charles Worth and the Queer Origins of Couture
Abigail Joseph