The following interview with Douglas A. Wissing appears on our blog courtesy of the Indiana Historical Society. Take a sneak peek at Wissing’s new book IN Writing in this excerpt.

From scrambling over avalanche-choked passes in Tibet to track down a source to meticulously tracking down mismanaged U.S. government development aid in Afghanistan, journalist and author Douglas A. Wissing has done whatever it has taken to write his stories.

The Bloomington, Indiana, author has, however, also discovered much to write about in his home state of Indiana. The results of his efforts are included in a new collection of his articles, IN Writing: Uncovering the Unexpected Hoosier State, recently copublished by IHS Press and Indiana University Press.

The book captures in all its glory: sacred and profane; saints and sinners; war and peace; small towns and big cities; art, architecture, poetry and victuals. It’s about Hoosier talent and Hoosier genius: the courageous farmer-soldiers who ardently try to win the hearts and minds of 21st century Afghan insurgents; the artisans whose work pulses with the aesthetics of far-away homelands; and the famous modernist poet who had to leave to make his mark.

Wissing took some time to answer some questions about his book, and his writing process.

I grew up a couple of blocks from the Carnegie Library in Vincennes, Indiana, and after about the age of six it became my destination of choice. It was in the golden era of newspaper journalism, and there were three different papers at our house each day, including the then-superlative Louisville Courier-Journal. There were stacks of books and magazines around the house. Being a voracious reader inevitably led me to want to spin some of those entrancing and world-spanning stories. 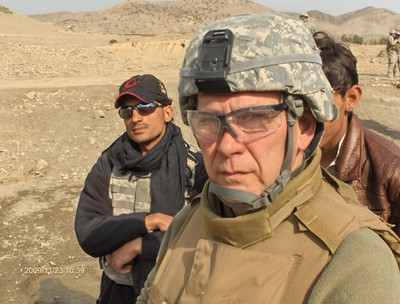 What draws your attention to a story?

It feels wildly idiosyncratic. After reading a short article on a street corner in Mexico about a team of U.S. farmer-soldiers in Afghanistan, I ended up covering the failed counterinsurgency for five years, embedding with American troops (including some courageous Indiana National Guard teams) in some of the most violent warzones. That chance reading resulted in my books, Funding the Enemy: How U.S. Taxpayers Bankroll the Taliban and the upcoming Hopeless but Optimistic: Journeying through America’s Endless War in Afghanistan. I got the idea for Pioneer in Tibet, my biography of the renowned explorer of Tibet, Hoosier-born Doctor Albert Shelton, from a book of old photos. I get ideas from conversations, books, and ideas pitched to me by editors. You got any good ideas?

Do you have a place where you do your writing? What is your routine like?

Most often I write at my old wooden harvest table in my kitchen in Bloomington’s Prospect Hill neighborhood. Good light streams in and birds bicker at the feeders. Penelope the cat wants out. I have an office but never manage to get everything over there to write. So a book and all its material inevitably overwhelms my little 1860s Greek Revival cottage. It’s celebration after a manuscript is complete. My kitchen table is liberated from piles of books and research, and I can invite friends over for dinner.

What is it about Indiana that has caused you to produce so many stories about the state?

I’m as Hoosier as you get. My mother’s family descended from French fur traders who came to Vincennes in the 18th century. My father’s forebears were Alsatians, who came to Indiana in the 1850s with the great wave of German auswanderer immigrants. Ancestor John Ebner was a French Foreign Legionaire, so my wanderlust is in the DNA. Ebner was a pioneer Hoosier brewer in Vincennes, which informed my book Indiana: One Pint at a Time that covered both Indiana’s rich brewing history and the state’s astounding craft-beer renaissance.

But from the time I was a boy, I also understood the state’s extraordinary and unexpected connections to the wider world. I find Hoosiers in the most remarkable places: deep in the Himalayas, in bastions in Afghanistan, and in teeming cities across the globe. We just get around, and seem to make friends wherever we go.

Is there a subject or person that interests you that you have not yet written about?

Oh my goodness—way too many projects and not nearly enough time. I’m interested in the Hoosier origins of the Symbionese Liberation Army; a book on the privatized U.S. prison system; French perspectives on George Rogers Clark’s campaign in what became the Northwest Territory; and articles on Azerbaijan, Guatemala and Borneo, where I researched this year; a novel set in the Kennedy era, titled, Paper Boy and Ice Man. That’s just the files I see around me. No end to interesting subjects.

What is your next writing project?

Indiana University Press will be publishing Hopeless but Optimistic: Journeying through America’s Endless War in Afghanistan in fall 2016. The book recounts my last research trip through the insurgency-wracked battle spaces of Afghanistan. It’s a picaresque narrative of a war gone horribly wrong. So this winter I’ll be minding my punctuation and tenses as the proofs go back and forth.