Last month, I had the privilege of attending the Association of American University Presses' annual meeting in Boston. This opportunity was made possible through the generous support of the Pat Hoefling Memorial Fund. Pat encouraged me to attend my first AAUP back in 2006, one month after I was appointed the electronic marketing manager. That meeting helped me grow leaps and bounds in my new position. And while I'm not a newbie any more, I'm grateful that I had the chance to go to another AAUP meeting because I always come away with new ideas on how I can be a more effective publisher. This meeting provided a good deal of thought-provoking material (see the 28 pages of notes that I took!). 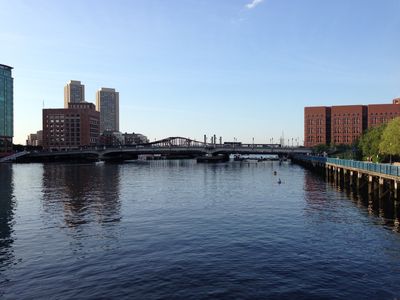 A beautiful day for a conference in Boston!

And now on to all the new information that I learned: I attended an excellent pre-conference workshop on digital marketing organized by IUP's very own Mandy Clarke and Amanda Atkins at MIT Press. Presenters included Laura Sell from Duke University Press, Colleen Lanick from MIT, Kristi McGuire from the University of Chicago Press, Ivan Lett from Yale University Press, and Brady Dyer from University of Texas Press. I've been following (and "borrowing") what many of these presses have been doing with online marketing for years, so I was excited to learn more from them in person. The top five new ideas that I'll be implementing from each press are:

The full meeting started the day after the pre-conference workshop. There was a TON of information packed into two days of sessions, but what stood out most for me were the two plenaries on big ideas in publishing and the story of the closing and subsequent reopening of the University of Missouri Press. Three challenges presented in these sessions were:

I've only scratched the surface on what I learned at this year's AAUP, but this post is getting far too long, so I'd like to end with one last word about Pat. She was a true champion of helping her employees reach their full potential. Although she is no longer with us, I'm glad that she can still have a positive impact on my professional development. My thanks to the grant committee for honoring me with this award.