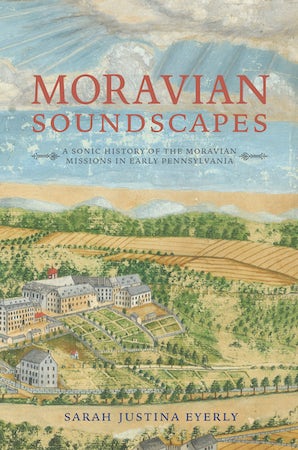 A Sonic History of the Moravian Missions in Early Pennsylvania

In Moravian Soundscapes, Sarah Eyerly contends that the study of sound is integral to understanding the interactions between German Moravian missionaries and Native communities in early Pennsylvania. In the mid-18th century, when the frontier between settler and Native communities was a shifting spatial and cultural borderland, sound mattered. People listened carefully to each other and the world around them. In Moravian communities, cultures of hearing and listening encompassed and also superseded musical traditions such as song and hymnody. Complex biophonic, geophonic, and anthrophonic acoustic environments—or soundscapes—characterized daily life in Moravian settlements such as Bethlehem, Nain, Gnadenhütten, and Friedenshütten. Through detailed analyses and historically informed recreations of Moravian communal, environmental, and religious soundscapes and their attendant hymn traditions, Moravian Soundscapes explores how sounds—musical and nonmusical, human and nonhuman—shaped the Moravians' religious culture. Combined with access to an interactive website that immerses the reader in mid-18th century Pennsylvania, and framed with an autobiographical narrative, Moravian Soundscapes recovers the roles of sound and music in Moravian communities and provides a road map for similar studies of other places and religious traditions in the future. 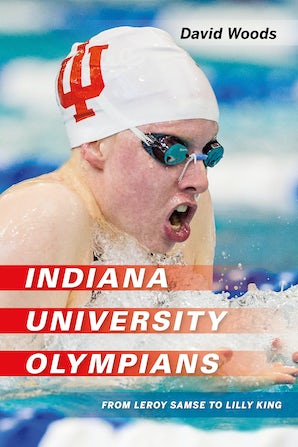 From Leroy Samse to Lilly King

From track and field to swimming and diving, and of course basketball and soccer, Indiana University Olympians celebrates over a century of Indiana University Olympic competitors. Beginning in 1904, at the 3rd summer games in St. Louis, IU's first Olympic medal went to pole vaulter LeRoy Samse who earned a silver medal. In 2016, swimmer Lilly King rocketed onto the world stage with two gold medals in the 31st Summer Games in Rio de Janeiro.

Featuring profiles of 49 athletes who attended IU, Indiana University Olympians includes the stories of well-known figures like Milt Campbell, the first African American to win decathlon gold and who went on to play pro football, and Mark Spitz, winner of seven swimming gold medals. The book also highlights fascinating anecdotes and the accomplishments of their less well-known colleagues, including one athlete's humble beginnings in a chicken house and another who earned a Silver Star for heroism in the Vietnam War. Despite their different lives, they share one key similarity—these remarkable athletes all called Indiana University home. 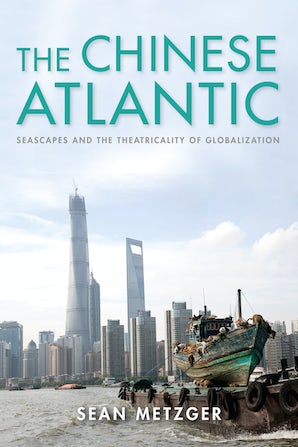 Seascapes and the Theatricality of Globalization

In The Chinese Atlantic, Sean Metzger charts processes of global circulation across and beyond the Atlantic, exploring how seascapes generate new understandings of Chinese migration, financial networks and artistic production. Moving across film, painting, performance, and installation art, Metzger traces flows of money, culture, and aesthetics to reveal the ways in which routes of commerce stretching back to the Dutch Golden Age have molded and continue to influence the social reproduction of Chineseness. With a particular focus on the Caribbean, Metzger investigates the expressive culture of Chinese migrants and the communities that received these waves of people. He interrogates central issues in the study of similar case studies from South Africa and England to demonstrate how Chinese Atlantic seascapes frame globalization as we experience it today. Frequently focusing on art that interacts directly with the sites in which it is located, Metzger explores how Chinese migrant laborers and entrepreneurs did the same to shape—both physically and culturally—the new spaces in which they found themselves. In this manner, Metzger encourages us to see how artistic imagination and practice interact with migration to produce a new way of framing the global. 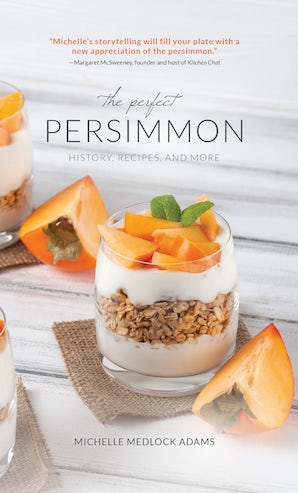 Whether served in a batch of cookies or in a soup bowl, the persimmon is a favorite fruit of Midwesterners. Called the "divine fruit" or the "fruit of the gods," persimmons range from the American common persimmon, perfect for every kind of dessert, to Fuyu persimmons, a variety from China that has since won many hearts.

In The Perfect Persimmon, award-winning journalist Michelle Medlock Adams serves up persimmon expertise, from knowing when the fruit is at its ripest to sharing the best preparation techniques. Adams hails from the birthplace of the Mitchell Persimmon Festival in Lawrence County, Indiana, where the Midwest's best-kept secret, persimmon pudding, has people flocking toward what some consider the persimmon capital of the world.

Armed with a love of persimmons that has been nurtured from a young age, Adams has collected the best persimmon recipes, guaranteed to satisfy any hankering for the savory or the sweet. Accompanying these recipes are personal anecdotes detailing childhood memories and folktales about greedy possums, wise turtles, and the persimmon seed's ability to predict winter forecasts, providing a colorful context for this favored fruit. 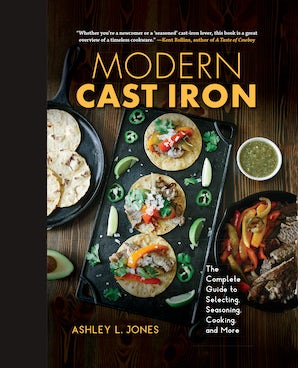 Warm, crumbly cornbread. Chicken sizzling in the pan. Childhood memories filled with delicious, home-cooked dishes and your family there to enjoy it with you. Cast iron's popularity faded in the '70s—replaced by chemically processed cookware—but today's cooks are reigniting a passion for wholesome cast-iron-cooked meals. This ain't your grandma's kitchen—caring for and cooking with cast iron is easy, healthy, and totally Pinterest worthy.

In Modern Cast Iron, self-proclaimed cast-iron connoisseur Ashley L. Jones recaptures the ease and joy of cooking with cast-iron cookware. Jones introduces readers to the best brands and types of cast-iron cookware to fulfill any cook's needs. She offers detailed tips and tricks for rescuing old, rusted pans and keeping them properly seasoned, and she shares recommendations for the best cooking oil for every recipe. With Jones's help, both experienced and beginner cooks will be able to rival grandma's cooking. Chock-full of stories from Jones's own childhood growing up with cast-iron meals, as well as recipe after tantalizing recipe—from breakfast quiche to gluten-free meals and beautiful blueberry cobbler—Modern Cast Iron explores the countless ways that cast iron benefits health and happiness.

A comprehensive guide to all things cast iron and home-style cookin', Modern Cast Iron offers a new way for cooks to spice up the kitchen using all-natural tools and ingredients.